From the Sanskrit उमा (flax), suggestive of character's hair color. One of over a thousand names for the Hindu goddess, Parvati. The original VIZ Media spelling, "Uma," is a common first name in India, and increasingly common in the West.

Owing to a similar spelling and pronouciation, ユマ often confused with ウマ

(yuma), Japanese for "pony." Or "Yuma," the county and town in Arizona, named after the North American Indian people—the Yuman—itself derived from "Yahnuiyo," meaning "son of the captain."

In her first appearance, her back turned, wearing her characteristic ponytail.[21]

A butterfly-shaped buckle holds 2-layer spaulders on the shoulders. The faulds skirt has horizontally overlapped bands on the hips.

After 7-year timeskip, she wears her hair loose.

During the timeskip, she replaces her Organization uniform. But instead of "Zettai Ryouiki" look—light armor worn over sleeved top, gaped stockings and short skirt—Yuma wears a "catsuit". Her only armor are spaulders on her shoulders.

Closest to Helen in dress. Later in Scene 129, before engaging Cassandra, Yuma reverts to her old uniform.[22]

Originally a low ranking double-digit, Yuma is fearful and hesitant in combat. Possibly one of braver warriors, since she has the most to overcome.

In Chaldean Numerology, the number 40—Yuma's number—reduces to 4, the sign of youth. A "4" is fated to have an immature and sometime insecure personality. Compare to Tabitha.

Yuma is a defensive type.[23] Having no Organization datasheet in the "Yoma War Record," her ability and baselines are unknown. Initially appears to have a low Yoma power baseline.

Yuma's iconic technique is the "thrown sword."[24] Possibly alluding to the Chakram—a thrown, bladed ring used by the Hindu goddess Uma as a weapon.

Born in Sutafu near Organization Headquarters[25]

Member of the battle group in Pieta during the Battle of the North. Assigned to Team Miria: Queenie (No. 20) and Tabitha (No. 3).[26]

During the first engagement with the three scouts, Team Miria fights the Dreadlock awakened. Yuma loses her arm.[27] 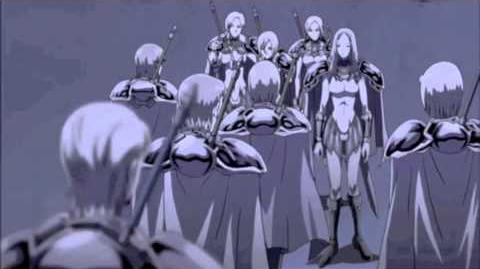 Uma being carried by Tabitha

Yuma appears in her own flashback, while she follows Clare in Alfons. In the banquet hall of the Eastern Inn, Miria holds a meeting with the battle group. She tells everyone to take a half dose of suppressant. If rendered unconscious during combat, a warrior will radiate no aura, making her appear dead to both the Northern Army and Organization.[28]

Yuma may be among the survivors during the inn lobby scene.[31]

Yuma is one of seven Ghosts who desert the Organization. Hiding in mountains, they train with Yoma powerless techniques. Miria serves as captain.[32]

Despite risking exposure to the Organization, the Ghosts rescue the Dabi hunt.[33]

Meanwhile, Yuma accompanies Clare to a deserted village. There, Clare finds evidence that Raki may still be alive. Back at the cavern hideout, she announces her intent to go south. Miria tests Clare's fighting ability. Satisfied, Miria says she will accompany Clare. But everyone decides to go en masse.[34]

The Ghosts find Rabona under siege by Agatha.[35] After Agatha's death, Miria relates her research on Organization—Miria's theory.[36]

Miria will wait in Rabona for everyone's return. But she adds one caveat: "When the time comes, I'll go forward alone if I must,"[37] foreshadowing the events of Scene 106.

In Lacroix, Cynthia and Clare fight awakened, while Yuma knocks unconscious Organization search party.[38] Yuma uses her thrown sword to immobilized the awakened's wings, enabling the final kill. But Rubel witnesses everything. Later in a private meeting under a gateway arch, Cynthia realizes that Rubel is a mole for the Dragons' allies.[39]

Rubel plays on their sympathies by claiming that Rafaela and Renée are being held captive by Riful. Clare suspects that Rubel is only trying to get them killed.[40]

Baited by Rubel, the warriors search for Renée and Rafaela. They run into Dauf, who grabs Yuma's leg, which Clare cuts off. While Cynthia regenerates Yuma's leg, Clare follows Dauf into Witch's Maw II.[41]

When the Destroyer awakens, Yuma flees carrying Cynthia, now too weak to flee on her own. They run into Beth, merging with a parasitic rod.[42]

As Yuma holds up Cynthia, they witness the Destroyer consume a forest.[45]

Ghosts repel an invasion of awakened and Yoma sent by the Organization in reprisal for Miria's attack.[46] Later on Helen's insistence, the Ghosts bring the Yoma cocoon from Lautrec to Rabona.[47]

Meanwhile, Yuma regenerates Audrey's limbs on the battlefield. Audrey is made whole. Soon Miria announces the death of Limt.[51]

The Ghosts sail back to Rabona. Clare is freed from the cocoon,[52] as well as the Destroyer and Priscilla, whose combat engulfs an awakened audience.[53]

Two female awakened are hurled into the city. They awakened into huge tapeworm- and origami-like forms.[54]

Miata then Clarice attack the Origami awakened. Clarice is thrown back, but is rescued by Cynthia and Yuma.[55]

Miria, Deneve, Helen and Clare fight the awakened Cassandra. Elsewhere in the hills, Cynthia, Tabitha and Yuma collectively synchronize their Yoma power with Cassandra, a technique that has parallels with Yoma Energy Alignment and Control and Yoma power harmonization. The goal is breaking the spell that Priscilla has over Cassandra's mind. And preventing the two from merging.[56]

They fail to synchronize with Cassandra. But despite this crisis, they become even more concerned about the mysterious, yet familiar aura that Helen noticed earlier.[57]