Unofficial name. Name derives from 妖気の塊が, which translates as "mass of Yoma energy." First mention by Yuma.[3] In the VIZ Media translation, Yuma says, "The giant mass of Yoma energy that was spreading as if it would swallow the forest...is flowing back toward the center.[4]

It instantly absorbs all life force from any living thing it touches, including Yoma-like entities.

Priscilla refuses to give up and continues to pursue the warriors. The Destroyer tries to engulf Priscilla, who bursts free of the mass. 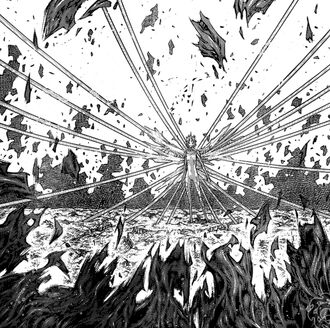