バイオレット is a transliteration of "Violet," also a flower with many religious connotations in the West.

赤壁 Sekiheki (red wall) is Violet's nickname. Both the name and nickname are revealed while she is defending the Holy City of Rabona, which resembles the Vatican. The nickname may allude to the “Red Wall” that protected the grave of St. Peter in St. Peter's Basilica. Within the context of Claymore, Violet is the "Red Wall" that protects Rabona and the relics of the saints.

Another possible allusion is translating 赤壁 as "red cliff," as in the Battle of Red Cliffs (from the Chinese 赤壁之戰) at the end of the Han Dynasty in the 3rd century.

Hairstyle: mid-back length with a fringe on the forehead. Elfin face with finely-chiseled features. Upslanted eyes similar to Undine's.[3]

Violet wears a lightly built buckle, which holds 2-layer spaulders on the shoulders. Vambraces cover the forearms just below the elbow.[4]

Violet participates in the Claymore Rebellion.[5] She survives the attack of the Abyss Feeders, only to be brought down by the reanimated No. 1 warriors.[6] 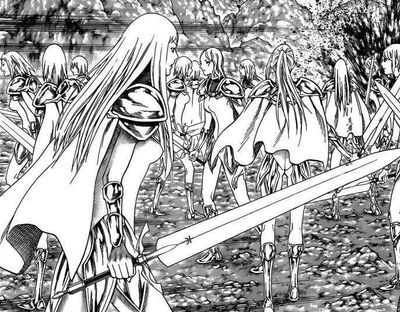 Violet during the attack of the three No. 1s

Later the awakened Hysteria has capture Violet for food. Hysteria keeps Violet and another warrior impaled on spike-like legs.[7] Dietrich cuts Violet free and is caught midair by Helen.[8]

Violet is part of the battle group that joins the Ghosts in the Holy City of Rabona. On the ramparts of the city, Galatea senses Europa's approaching aura, whose magnitude is of a greater order than the two previous Awakeneds that landed in town. Assembled behind Galatea are the warriors.[9]

When Europa crashes the city walls like a wreaking ball, Galatea orders everyone to draw their swords. Among the warriors is Violet.[10]

Retrieved from "https://claymorenew.fandom.com/wiki/Violet?oldid=59838"
Community content is available under CC-BY-SA unless otherwise noted.