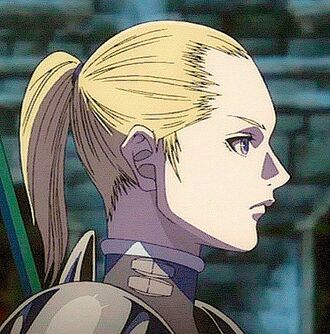 Chevron-patterned buckle holds 2-layered spaulders on the shoulders and a medium-built carrier between the cervical and thoracic of the spine. Her faulds skirt has a rhomboid seat plate.[14] 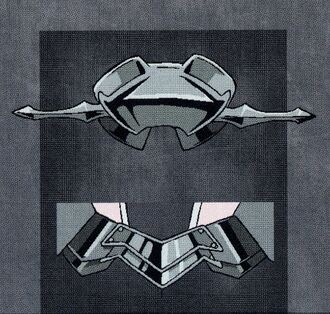 Veronica is a defensive type warrior.[15] Having no Organization datasheet in the "Yoma War Record," her ability and baselines are unknown.

Early life unknown. Previous friendship with Cynthia before Pieta is a common forum conjecture, but absent in the manga text.

During the first engagement with the three scouts, Team Jean is decimated by the Insectile awakened, all team members but Jean lying wounded.

Team Jean is rescued by Team Veronica. Veronica and Cynthia act as decoys, deliberately taking hits, both being of the defensive type.[17] Helen immobilizes Insectile's legs, enabling Jean to use Drill Sword to shear them off.


Veronica and Cynthia in action

Veronica and Cynthia chop up the legless torso.[18]

Veronica appears in Yuma's flashback. In the banquet hall of the Eastern Inn, Miria holds a meeting with the battle group. She tells everyone to take a half dose of suppressant. If rendered unconscious during combat, a warrior will radiate no aura, making her appear dead to both the Northern Army and Organization.[19]

The Northern Army invades Pieta. During the second engagement, Cynthia is unable to protect Veronica from Rigaldo. He kills Veronica. Cynthia tries to counterattack, but Rigaldo escapes to kill Undine, then wounds Jean. Clare awakens and attacks. But Rigaldo repels Clare and kills Flora.[20]

In Lautrec, after the 7-year timeskip, a dying Cynthia reminiscences about Veronica's death, describing her survivor's guilt and a desire to avenge, but no prior relation with Veronica.[21]

Retrieved from "https://claymorenew.fandom.com/wiki/Veronica?oldid=59832"
Community content is available under CC-BY-SA unless otherwise noted.