"Undine" derives from the Latin unda (wave). Coined by the medieval alchemist Paracelsus, who used it for water nymphs—minor goddesses which are small and delicate.

Deneve discovers by accident the true nymph-like form of Undine.

In her normal state, without released Yoma energy, Undine appears as her ethereal namesake. 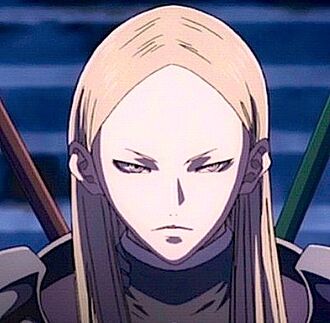 A "frog-mouth" buckle[19] holds 2-layer spaulders on the shoulders and a heavily built carrier between the cervical and thoracic of the spine. Undine's faulds skirt is a heavier version of the horizontal band array found on Rafaela's skirt. 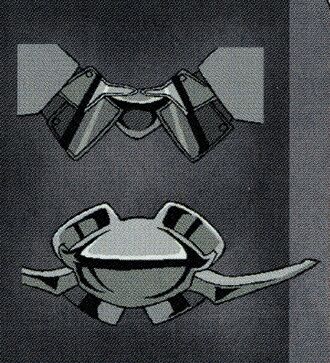 Irascible. Loud and boisterous surface hides a fragile psyche with a tragic past. Protective of those weaker than herself.

Displays a more positive attitude during the last meeting of the battle group, despite the dire situation.

Undine, feeling guilt over her friend's death, takes up her friend's sword. Undine builds a temporary muscular body in order to get permission from Organization to use two swords. But Deneve sees through facade even before seeing Undine's true form.[25]

A technique that Deneve calls "Two-Sword style" in the VIZ Media translation.[26]

The Organization notes Undine's muscle-bound figure results from her constant Yoma energy release. She managed to convince the Organization to allow her two-sword technique, which uses brute force. But as a consequence, her manner is also brutal in tone.[27]

In flashback, an earlier untransformed, frail Undine stands over body of fallen friend. Undine holds her friend's sword. Face of Undine's Friend is not shown.[28]

During the engagement with the three scouts, the Armadillo awakened decimates Team Flora. Team Undine rescues Team Flora from destruction. In an ensuing fight, Deneve only halfway beheads Armadillo. Undine pushes Deneve's sword down using both her swords and helps decapitate Armadillo.[31]

After the engagement with the scouts, Undine argues with Miria over the strategy. Undine realizes what Miria confessed earlier to Clare—that the plan has no chance of success.

Despite Flora's attempt to mollify Undine by rationalizing the need for all warriors to experience combat, Undine storms off to the storage shed behind the Eastern Inn. Later inside the shed, Deneve discovers Undine's true deflated form. But Deneve sees her own past in Undine's.[32]

Deneve makes peace with Undine and promises to help.[34]

Undine appears in Yuma's flashback. In the banquet hall of the inn, Miria holds a meeting with the battle group. She tells everyone to take one half of a suppressant pill. If rendered unconscious during combat, a warrior will radiate no aura, making her appear dead to both the Northern Army and Organization.[35]

Rigaldo wounds Deneve. Deneve despairs she did not keep her word to help Undine.

On the village plaza, Deneve takes up Undine's sword before the last combat.[37]

After the 7-year timeskip, the sword of Undine's friend appears in the warrior graveyard.[38]

The Northern Army invades Pieta. The Rigaldo sequence is similar to the manga.[39] In the inn lobby, Deneve takes up Undine's sword before joining the pursuit of Clare to the volcano.[40]

Retrieved from "https://claymorenew.fandom.com/wiki/Undine?oldid=60591"
Community content is available under CC-BY-SA unless otherwise noted.