Unnamed by characters in original Japanese text. Given a variety of names in translations, usually a synonym of "destroyer."

This second phase of the Destroyer—the "Twin goddesses"—is what is commonly called the "Destroyer" by readers and reference websites.

Clare first describes entity as a 破壊者 (destroyer) in generic sense of "vandal" or "breaker."[2]

Clare's dialog (ラファエラとルシエラの融合体から吐き出された破壊する者の断片だ) can be translated as "From the fused Rafaela and Luciela, fragments were broken and expelled."[4]

The structure later proves to be a facade. When the facade is destroyed by Priscilla, an entity of massive Yoma Energy is released. Later this Yoma Energy Mass contracts into a cocoon, trapping both Priscilla and Clare.

Both Luciela and Rafaela are of the offensive type.[5] Having no Organization datasheet in the "Yoma War Record," the ability and baselines of the Destroyer itself are unknown.

Appears to have high strength (shapeshifting) and Yoma power baselines.

Deneve senses Destroyer to be more powerful than the Abyssal Ones.[6]

Baited by Rubel, the warriors search for Renée and Rafaela. In forest, they encounter Dauf, who grabs Yuma's leg—Clare cuts it off.[7] While Cynthia regenerates Yuma's leg, Clare follows Dauf into Witch's Maw II. Fight inside castle results. But Clare escapes.[8] 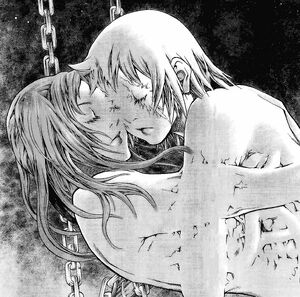 Renée takes a suppressant and flees. Dauf tries to pursue her, but she loses him. While Riful and Dauf are distracted by Renée, Clare reenters castle. There she finds the merged sisters, Luciela x Rafaela.[9]

Clare enters the mind of Luciela x Rafaela. In a dream world, Clare and Jean meet Rafaela in a replay from Scene 50.[10]

When Clare reaches out, Jean is gone. Rafaela attacks and Clare responds with Windcutter. But Rafaela kills Clare. But Clare wakes from dream within dream. Switching from Windcutter to Quicksword, Clare kills Rafaela with Ilena's arm. Rafaela gives Clare all her memories, among which is "something you must know."[11]

When the merged sisters awakens, the castle bursts apart.[12]

Deneve, Helen and Clare counterattack. One Hellcat shoots rods into Deneve's arm. The rods prove parasitic—they absorb the life of any living thing they touch.[17]

When one Hellcat fires a barrage of rods, Clare ricochets the rods back to the source.[18]

Hellcats surround the warriors, bringing back memories of Pieta.[19]

Between rod volleys, Priscilla finds the source of Teresa's scent. Clare confronts Priscilla for first time since Clare's childhood.[20] Clare is ready to abandon friends and her humanity to avenge Teresa's death.[21]

Deneve decides to seek refuge with the Destoyer. .[23]

Dauf intercepts Priscilla. But she defeats him. Her memory nearly restored, she continues her pursuit.[24] 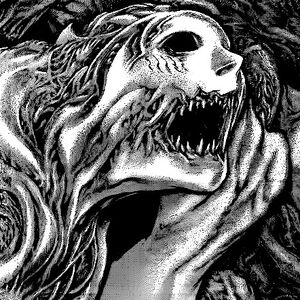 While pursuing the warriors, Priscilla is hit with tentacles from the Destroyer. Priscilla then attacks the Destroyer with her own tentacles. The Destroyer crumbles apart, only to reveal its true form—a Yoma energy mass of demonic female shapes, swallowing all life it touches.[25]

Retrieved from "https://claymorenew.fandom.com/wiki/Twin_goddesses?oldid=60317"
Community content is available under CC-BY-SA unless otherwise noted.