Unofficial proper name. Unnamed by characters. Derived from Miria, who first describes the sisters as 訓練生[3] kunren-se (trainees),[4] then as 双子[5] futago (twins).[6]

Unlike shirt and leggings worn by other trainees, the Twins wear a backless shirt and natal cleft shorts designed to permit extreme shapeshifting.[7] The shirt has spaulders attached to the shoulders.[8]

Reptilian dragon form with bladed appendages and twin tails. Differs in form from Alicia and Beth. The Twins' heads resemble the jawless, fanged Awakened in Scene 85.[9] 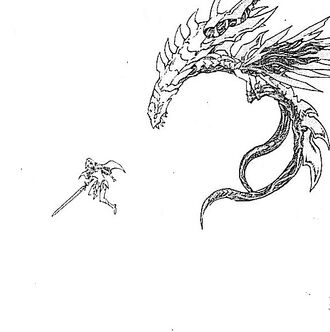 Reserved, but unlike Alicia and Beth, retain some remnants of self. Capable of taking action independent of Organization.[10][11]

Unknown type. Having no Organization datasheet in the "Yoma War Record," their ability and baselines are unknown.

Appears to be a form of Controlled Awakening.

At Organization Headquarters, Miria disables most warriors, as she did Tabitha in Rabona. But ends up fighting Twins, with similar Controlled Awakening as Alicia and Beth.[13]

Rafutera uses Yoma power harmonization to entrain Miria's mind, enabling other warriors to cut her down.[14] But warriors only pretend to kill Miria. Man in Black believe Miria dead.[15]

The Men in Black stay indoors as Limt orders the Abyss Feeders to be released. The Abyss Feeders attack the rebels. Miria orders weaker warriors to retreat, while single-digits fight the Feeders.[17]

One of the Twins breaks into Raki's prison cell.[18] She then attacks Raki with tentacles.

As other trainees watch, Raki leaps outside and grabs another trainee's sword. He deflects the Twin's attacks. Then her sister joins the attack.[19]

But he stops the fight and explains who he is. Another trainee explain they are fleeing Organization.[20]

While the Twins aid the Claymore rebels, Raki takes over the protection of trainees.[21]

Miria ends up fighting Hysteria, while the Twins fight Roxanne.[24]

The resurrected Roxanne defeats Twins. While waiting for them to reattach their limbs, Roxanne watches Cassandra fight Audrey, Rachel and Nina.[25]

When Cassandra awakens, Miria defends a Twin from one of Cassandra's hydra tentacles. Miria orders the Twins to evacuate Audrey, Rachel and Nina, while Miria holds off Cassandra.[26]

Roxanne has awakened into an industrial sculpture form, with Sphinx-like head.[28]

Roxanne picks up a wounded Claymore warrior to eat. But a Twin cuts free the warrior.[29]

When Roxanne tries to capture the Twin, Cassandra interferes. The combat between the two Awakeneds begins.[30]

After the Organization collapses, Rafutera tries to apologize for using her technique on Miria, who understands that Rafutera was only acting under orders. Miria says that the Twin Trainees will want to thank Rafutera for saving their lives, when they were fighting Roxanne.[31]

Retrieved from "https://claymorenew.fandom.com/wiki/Twin_Trainees?oldid=60296"
Community content is available under CC-BY-SA unless otherwise noted.