Strength baseline enables this technique: a sword slung with wide swinging motion, resulting in either a spearing or rotary action on target—Yuma uses both methods.

Does not depend on particularly high Strength baseline.

Sword leaves the warrior's hand, whirling like propeller toward the target, but piercing the target like a spear.

Sword spins like propeller, but results in a mincing action. Most destructive version. Compare to rotary version of Drill Sword.

In the town of Strah, Clare engages a Yoma pack. She uses the spear method, hurling the sword skyward to pierce the Winged Yoma.[2] 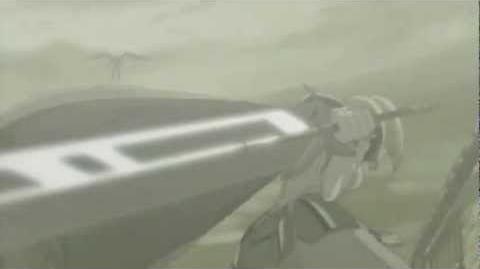 The Ghosts visit the village of Lacroix, where they encounter a search party from the Organization, who are looking for Renée.[3]

Among the crowd of spectators, a woman shapeshifts into an awakened being.[4]

Cynthia and Clare whittle down the false body of awakened—the true core escapes as Winged Yoma-like entity. Yuma hurls a rotary sling to mince the wings.[5]

During Yoma invasion of Rabona, Winged Yoma attacks Galatea from behind—Yuma slings her sword to punch through the Yoma's head.[6]

During a engagement with a group of awakened, Anastasia goes down, wounded. Anastasia's hunt is completely surrounded.[7] But the Ghosts counterattack.

Yuma must fight alone. She slings her sword, which makes a rotary pattern. The awakened's legs pop apart.[8]