Two Greek-like goddesses joined as Conjoined twins, back-to-back. They wear over-the-shoulder length hair and share one pair of wings. Teresa is on the left, Clare is on the right.[11] 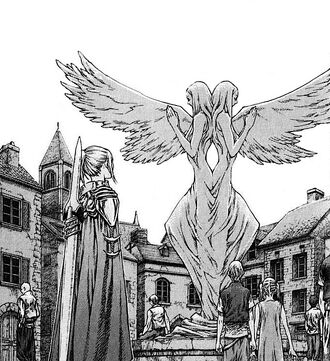 After Teresa inadvertently rescues a mysterious girl from a Yoma pack, the girl insist on tagging along. As they journey through the wilderness, Teresa tires of not being able to address the girl with a proper name.

On a spur of the moment, Teresa names the girl "Clare," only to find out that is her name.

Teresa tells Clare about the twin goddesses. She speculates that Clare's parents named her Clare in hopes that she would have the goddess's traits.[14]

Clare deserts the Organization for three months, as she searches for Raki. In the town of Hamel, she discovers two children arguing over the Teresa and Clare statue in the village plaza. The boy tells his younger sister that he told her about the statue, but she replies that a stranger told him about the statue.[15] 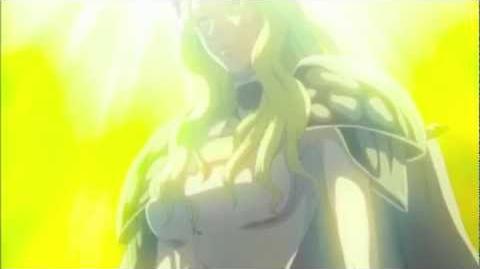 On questioning the children, they confirm Raki's temporary presence in town, but are unable to tell his current whereabouts.[16]

In the anime, Galatea remotely observes the combat between Priscilla and Clare from the interior of a Pieta church, its stained-glass window depicting the goddesses Teresa and Clare.[17] 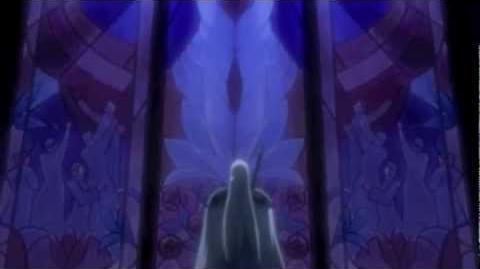 After the 7-year timeskip, Clare discovers an underground slave prison in a ruined Alfons village. She finds a drawing of the goddesses on the cell wall. She concludes that Raki was imprisoned here but later escaped.[19]

Luciela x Rafaela awakens in the Witch's Maw II. The resulting, sky-high awakened being is a demonic parody of Teresa and Clare.[20]

Retrieved from "https://claymorenew.fandom.com/wiki/Teresa_and_Clare?oldid=60713"
Community content is available under CC-BY-SA unless otherwise noted.