The original Japanese Claymore name, タバサ, transliterates from "Tabitha," deriving from "gazelle" in Aramaic. Allusion in Claymore unknown. Used as an English-language name since the English Reformation.

The nickname "Dark Silver Eye" is not found in the Claymore manga, "Yoma War Record" or anime. This nickname appeared in the Wikipedia article on Claymore characters in 2007 (edit now removed).[11] Oft-repeated on reference sites, forums and in fan-fiction.

A butterfly-shaped buckle holds 2-layer spaulders on the shoulders. Similar to Yuma's buckle. Vambraces cover the forearms up to the elbow.

Closest to Miria in dress. Later in Scene 129, before engaging Cassandra, Tabitha reverts to her old uniform.[13]

Subdued. Emotionally attached to Miria. In Chaldean Numerology, the number 31—Tabitha's number—reduces to 4, the sign of youth. A "4" is fated to have an immature and sometime dependent personality. Compare to Miata and Yuma.

Unknown type. Tabitha being a defensive type is fanfiction and forum speculation. Having no Organization datasheet in the "Yoma War Record," her ability and baselines are unknown. Appears to have a high sensing baseline.

Nothing specific described of her sensing technique in the manga, Yoma War Record or anime.[14]

Tabitha becomes the Ghosts' "Eyes" during the 7-year timeskip. She guides the Ghosts in attack and avoidance.[15] Sensing power of much lower resolution than Galatea's Wide Area Sensing, however.[16]

Tabitha appears in Yuma's flashback. In the banquet hall of the Eastern Inn, Miria holds a meeting with the battle group. She tells everyone to take a half dose of suppressant. If rendered unconscious during combat, a warrior will radiate no aura, making her appear dead to both the Northern Army and Organization.[19]

Before the second engagement, Tabitha appears in Scene 56. After the last combat of Pieta, seven survive—Miria, Cynthia, Deneve, Helen, Tabitha, Yuma and Clare.[20]

Tabitha speaks about her fears at the inn lobby, angering Undine, who leaves for the store-room.[21] 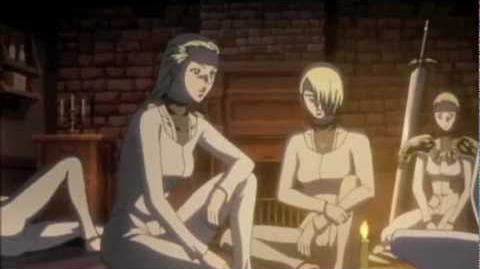 Tabitha last appears helping an injured Miria during the inn lobby scene. Tabitha is put in charge, along with Cynthia, of the wounded.[23]

Tabitha is one of seven "Ghosts" who desert Organization. Hiding in the mountains, they train with Yoma powerless techniques. Miria serves as captain.

Meanwhile, in a deserted village, Clare finds evidence that Raki may still be alive. Back at the cavern hideout, she announces her intent to go south. Miria tests Clare's fighting ability. Satisfied, Miria says she will accompany Clare. But everyone decides to go en masse.[26]

The Ghosts find Rabona under siege by Agatha.[27] Tabitha guides warriors as to location of Agatha's vital core.[28] Afterward, Miria relates her research on the Organization—Miria's theory.[29]

Miria will wait in Rabona for everyone's return. But she adds one caveat: "When the time comes, I'll go forward alone if I must,"[30] foreshadowing the events of Scene 106.

Miria sees her opportunity. To prevent Tabitha from following, Miria wounds Tabitha. Then sets out alone for Organization Headquarters.[33]

After Miria's failed attempt to destroy the Organization, awakened beings and Yoma invade Rabona. Tabitha, Galatea, Clarice and Miata attempt ot defend the city with the human guards. The arrival of the Ghosts finally defeats the invasion. The resembled Ghosts repel the invasion.[34]

After mutual recriminations over Miria and Clare,[35] the warriors break up a fight between Tabitha and Deneve, who prevents Tabitha from going alone to Sutafu to rescue Miria.[36]

Ghosts decide en masse to rescue Miria, anyway. Along the way, the Ghosts save Anastasia's hunt.[37] But at a juncture, Deneve lets Tabitha decide which path to take.[38] Tabitha chooses to destroy a Yoma-making facility over Miria, believing that would have been Miria's own choice.[39]

Yoma power hidden, Tabitha succeeds in approaching Hysteria, then clipping her wings. But when the others close in, Hysteria instantly retreats to earth. The warriors are left crossing each others swords.[42]

Meanwhile, Tabitha helps regenerate the wounded on the battlefield. Soon Miria announces the death of Limt.[45]

After the Ghosts return to Rabona, they and the Rabona guards combat two awakeneds that land in the city.

Miria and Clare dodge Tapeworm awakened's attack. Tapeworm bristles with dozens of armless torsos, each identical—only one contains the vital organs, according to Tabitha. But the situation is complicated by the awakened's Yoma aura spread evenly among the torsos.[46]

Miria, Deneve, Helen and Clare fight the awakened Cassandra. Elsewhere in the hills, Cynthia, Tabitha and Yuma collectively synchronize their Yoma power with Cassandra, a technique that has parallels with Yoma Energy Alignment and Control and Yoma power harmonization. The goal is breaking the spell that Priscilla has over Cassandra's mind. And preventing the two from merging.[48]

They fail to synchronize with Cassandra. But despite this crisis, they become even more concerned about the mysterious, yet familiar aura that Helen noticed earlier.[49]

Retrieved from "https://claymorenew.fandom.com/wiki/Tabitha?oldid=60593"
Community content is available under CC-BY-SA unless otherwise noted.