In the Claymore series, "aura"[5] and "suppressant"[6] appear only in some translations and not in the original text.[7][8]

What personal effects warriors carry is minimal—but is sufficient enough to perform each mission. To hide one's identity as a Claymore during covert operations, there are pills that suppress Yoma energy for over half a day. The eye color of warriors then returns to normal.[9]

Rubel gives Clare her new assignment. A request came from Rabona. But since Rabona bans anything "unnatural," including Claymore warriors, Clare has to take suppressant to return her eye color to "normal."[10]

The downsides are that the medicine neutralizes Clare's ability to detect the aura of Yoma.[11] And that the medicine's effect is only temporary. When Raki wakes up in the morning at the inn, he notices Clare's eyes are silver again—the suppressant wore off overnight.

In the town of Hamel, Clare searches for Raki. She checks in at a local inn. From up in her room, she watches the Zakol hunt leaving town.[12] 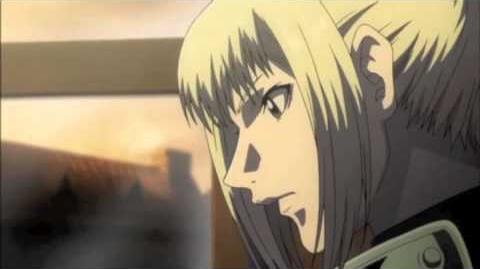 Despite Clare's suppressant, the hunt captain (Jean) detects Clare's weak aura. But Jean shrugs it off as her imagination.[13]

In Pieta, before second engagement, Miria holds her final meeting with the Battle Group. Miria has all the warriors take a half dose of suppressant. If rendered unconscious during combat, warrior's lack of Yoma power makes her appear dead to both the Northern Army and Organization.[14]

Rado instructs Clarice and Miata to take suppressant to hide their aura from Galatea.[15]

When Clarice asks how will they find their target if their own powers of Yoma power detection are suppressed. Rado say Miata's "sixth sense," a heightened version of human five senses, will find Galatea.[16]

Three Ghosts—Cynthia, Yuma and Clare—visit village of Lacroix, where they encounter a search and rescue team looking for Renée. The Claymore warriors have taken suppressant to hide their presence.[17]

Retrieved from "https://claymorenew.fandom.com/wiki/Suppressant?oldid=59632"
Community content is available under CC-BY-SA unless otherwise noted.