Originally a fan-reader term, based on a misreading of the Freezing series, where 聖痕 Seikon (Stigmata) refers to hexagonal-shaped tablets made from cell cultures, harvested from extraterrestrials called Nova.[2] In Freezing, "Stigmata" does not refer to scars or incisions.

In Claymore, the Yoma implant and abdominal incision are both unnamed. The implant itself is not depicted, unlike Freezing.

"Stigma" derives from the Ancient Greek στίγμα (“brand”). In Christian theology, "stigmata" refers to non-healing wounds that can bleed. It is implied that the Claymore stigmata may also bleed, releasing a Yoma scent that Clare can never wash off, as Rubel says in Scene 2.

is the plural of "stigma."

Despite Teresa disclaiming "savior" status, Claymore resembles a Christian allegory, in which stigma-bearing warriors die for the sins of humanity, as the Teresa arc illustrates.

A Claymore warrior's abdomen bears an unhealable incision, which frightens most people who see it. The incision runs down from the throat to the mons pubis.[3] 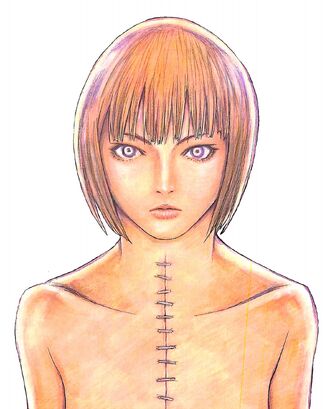 The incision provides sites for the Yoma tissue implants throughout the body. Only sutures prevent the internal organs from spilling out.[4]

Warriors such as Teresa report that the stigma does not hurt. Initial pain associated with the stigma is the Yoma implants taking hold in the body, turning the human subject into a half-Yoma. Unknown as to amount of bodily fluids, if any, bleeds from the stigma, or the degree of clotting.

The cartoon in the infobox shows a humorous possibility as to the stigma's appearance.[5]

Early in the Teresa arc, Teresa frightens away a gang of bandits by exposing her abdomen.[6] After an altercation with Rig, Clare hugs Teresa's stigma, believing it hurts Teresa.[7]

While Clare bathes by a waterfall, Rubel reminds Clare that she cannot wash away the smell of Yoma from her body, since her own body produces the smell.[8] This may allude to bodily fluids or scent emanating from the non-healing incision.

In a Lautrec forest, Clare rendezvous with Rubel, who brings a new set of shirt and leggings to replace the ones damaged by the Awakened Claymore in Egon.[9]

Rubel examines Clare's wound. He directly alludes to Clare's stigma, asking what would Raki think if he sees it.[10]

On Mount Shire, Clare confesses that the abdominal pain was so intense during transformation, she could only sleep by clinging to her best friend, Elena.[11]

Later in Gonahl, Ophelia seizes Clare and pokes her fingers into Clare's stigma, then tastes Clare's blood. Ophelia confirms that Clare is at least partially awakened.[12]

In Rabona, after the Agatha incident, Galatea speaks with Father Vincent in the cathedral. They are interrupted when Clarice chases down Miata, trying to escape a bath. Miata hides behind the priest. Vincent is unsurprised by Miata's stigma, having seen Clare's when binding her wounds.[13]

At Organization Headquarters, Helen fears that Clare, naked in the cocoon, may refuse to leave, being ashamed of her stigma. Then Deneve expose her abdomen, shocking Raki. She tells him that he must embrace Clare with all his might.[14]

As Raki speaks to Clare through the cocoon casing, a section of the cocoon crumbles and Clare emerges.[15]

But Clare's internal organs are spilling out from the vertical incision running down the length of her torso. While Raki and Yuma press close the incision to prevent Clare's organs from emerging, Deneve quickly sews with a large needle similar to a Hagedorn or sailmaker's needle, which pathologists use to close up bodies after an autopsy. Deneve uses the traditional "baseball" stitch that medical professionals still use today. 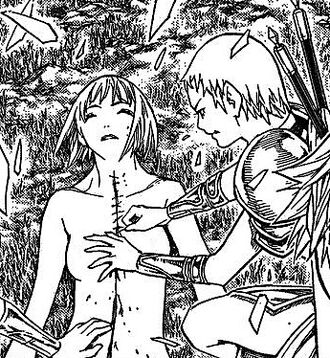 Deneve explains that the Organization never solved the problem of healing the Yoma implant incision and used sutures to keep the warriors whole.[16]

During the Claymore Rebellion, Limt reveals to Miria the secret of the Dragons' Descendents. He explains that they are a hermaphrodite people, who once awaken, remain in their dragon form. And can live up to 200 years.

And shavings of tissue from their awakened and unawakened forms, when combined, create a mobile parasite that takes over the brain in humans, who develop into Yoma. This parasite moves from its old host, once the host is physically exhausted, to a new host.[17] It is not shown what procedure is used to insert the parasite.

Tissue of infected humans are used to make implants for the creation of Claymore warriors. It is stated in the "Yoma War Record" that some trainees do not survive the procedure, due to the physical and psychological trauma.

Unknown as to exact procedure to make non-warrior awakened males and Abyss Feeders, though the tissue of salvaged awakened beings are used. Possibly similar or the same as making Claymore warriors, since donor tissue is involved. Abyss Feeders bear sutures all over their bodies, some or all possibly stigmata.

Possibly due to the lifespan of the Dragons' Descendents, all Yoma-entities do not age beyond reaching an age-range spanning from pre-adolencense to early adulthood.

Retrieved from "https://claymorenew.fandom.com/wiki/Stigma?oldid=60720"
Community content is available under CC-BY-SA unless otherwise noted.