膂力のソフィア[23] (Muscular Sophia).[24] ソフィア transliterates from the "Sophia," from Greek Σοφια (wisdom), implying intellectual qualities. Sophia has a B level mental baseline.[25] The name of several saints and princesses.

Sophia does not have a nickname in the France, Germany and Italy editions.

Currently the No. 1 name for newborn females in the US.[26]

If only one word could be used to describe Sophia both physically and personality-wise, it would be "elegant."

Old Generation uniform. A bull horned-shaped buckle holds 2-layer spaulders on the shoulders. Mid-calf chausses are typical of the era. Faulds skirt has a spatulate seat-plate.[27] 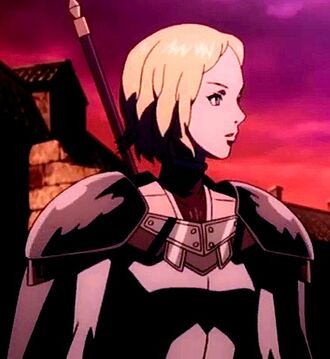 Patrician manner conceals temper when provoked. But even her anger has an elegance about it.

Somewhat more mature than Noel, though less so than Ilena. Fearless even in the face of the awakened Priscilla.

Sophia is an offensive type[30] warrior, her ability being Slashing Blow.[31]

The Organization assesses Sophia as the strongest warrior (Strength A+). Noel is her overall equal in combat results, but Sophia is made No. 3 for record-keeping purposes only. But this leads to endless conflict between the two. During the purge of Teresa, Sophia is killed by the awakened Priscilla.[33]

Teresa leaves Clare with foster family in Rokut. But Teresa returns too late to save village from bandits, who she executes. Teresa breaks cardinal rule of Organization—never kill humans. Later she resists execution, when Orsay refuses to reveal Clare's fate. Teresa leaves with Clare.[34]

Two warriors—Sophia (No. 3) and Noel (No. 4)—meet in a Yoma nest, a town devoid of all human life.[36] As they kill Yoma, they argue who should be No. 3. Noel compares Sophia's strength-based technique to a gorilla's, while Sophia compare's Noel's agile-based technique to a monkey's. Noel challenges Sophia to a fight.[37]

But No. 2, Ilena arrives. She says a new No. 2 has been promoted. Everyone has been demoted by one rank. This angers Noel.[38]

The new No. 2, Priscilla, stumbles from an alley. Noel challenges her to a fight, then sees the alley filled with Yoma body parts. Priscilla has Yoma Energy Control, enabling her to completely turn off her aura. Sophia never sensed her fighting in the alley.[39]

At another village, the purge team locates Teresa at the local inn.[40]

Ilena bursts into Teresa's room. Ilena keeps Teresa distracted with a sword-fight. Meanwhile, downstairs in the lobby, Sophia plunges her sword through the ceiling. But Teresa dodges the blade. As she does Noel's attack through the window. Teresa and Clare escape to the street below.

Teresa's Preemptive Sensing does not detect Priscilla's presence, until Priscilla introduces herself.[41]

After Priscilla fails to bring down Teresa, the rest of the team joins in. Despite Sophia's greater strength, Teresa proves too agile for Sophia's power moves.

One-by-one, Teresa defeat the warriors. And without releasing Yoma power, unlike the purge team. Under Priscilla's leadership, the purge team proves little more than an organized mob.[42]

Teresa and Clare leave town.[43] But Priscilla awakens and pursues them. On a deserted plateau, Priscilla continues to fight Teresa. The purge team arrives on the scene. They watch in horror as Priscilla beheads Teresa.[44]

Priscilla fully awakens into the One-horned Monster.[45] Priscilla cuts off Ilena's left arm. The remnants of the purge team then attack. Noel cuts off Priscilla's arm, which regenerates. Priscilla's claws first impale Noel, then Sophia, killing them both.[46] Priscilla finishes off the helpless Ilena, but ignores Clare, who despises herself then after for being afraid.[47]

Clare decides to use Organization as venue for revenge. Cradling Teresa's head, Clare finds a Man in Black—Rubel.[48]

After the 7-year timeskip, Clare reminisces about "Muscular" Sophia during Clare's combat with Priscilla in Lautrec.[49]

Retrieved from "https://claymorenew.fandom.com/wiki/Sophia?oldid=60568"
Community content is available under CC-BY-SA unless otherwise noted.