"Sister" and "Brother"[3] appear only in the FUNimation dub credits. Unnamed by the characters in the manga and anime. 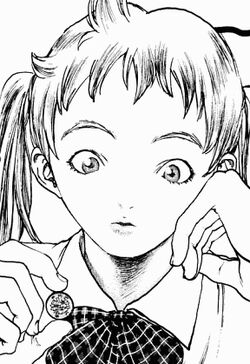 As with her predecessor, Sana, Sister is young but assertive with her elders. Compassionate. Good judge of character as she senses Raki's true inner qualities, despite his ominous appearance.[5]

In unnamed town (named Hamel in anime), Clare searches for Raki. She checks in at a local inn. From up in her room, she watches the Zakol hunt leaving town.[6]

Despite Clare's aura suppressant, the hunt leader (Jean) detects someone's presence. But Jean shrugs it off as her imagination.[7]

Clare gets up early. The innkeeper tells her the Claymores left for the Zakol Mountains. Clare resumes her search before they return.[8]

In the village plaza, she comes across a Teresa and Clare statue and two minors—a teenage boy and his younger sister. Brother and sister argue over the statue, during which the girl mentions speaking to a stranger. 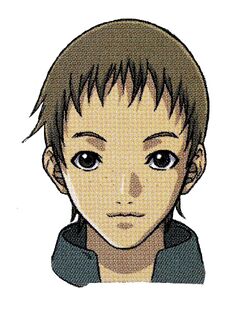 On questioning, the girl confirms that someone, fitting Raki's description, was asking which goddess is "Clare." He appeared to be injured.[9]

On further questioning the girl, Clare becomes convinced that Raki was in Hamel.


Clare speaks with children in Hamel

But someone screams. A fatally wounded, unnamed warrior staggers into town. As she falls, Clare catches her.[10]

Retrieved from "https://claymorenew.fandom.com/wiki/Sister?oldid=57486"
Community content is available under CC-BY-SA unless otherwise noted.