Unnamed by characters in the manga and anime.

A 2-piece suit made of a shirt and leggings. The shirt has an open neck and open cuffs at the wrists and ankles.[1] The suit is often worn with gloves,[2][3] the cuffs and gloves both being tucked under vambraces.

At the Claymore school, trainees wear the standard shirt and leggings, together with a symbol-less dicky. One exception to the standard pattern is the Twin Trainees, whose backless shirt and low-rise shorts are designed to permit shapeshifting.[4]

Usually made from a light gray fabric.[5] An exception is the black fabric worn by Alicia, Beth and on the limbs of Helen. This black fabric appears to stretch indefinitely.

Leggings are pulled on the body before the shirt. Similar to the bottom half of a leotard. 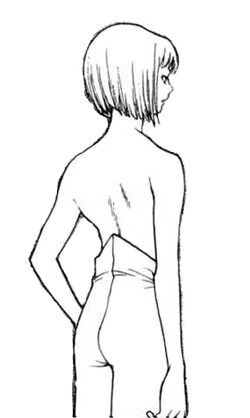 The shirt is held in place around the shoulders by sewn-in metal plates that open and close like a clamshell.[6] 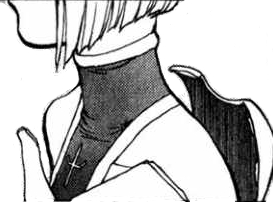 The "clamshell" apparently serves as the foundation for the spaulders and sword carrier. The back plate between the shoulders protects the warrior from being cut by her own sword when sheathed in the Carrier.[7]

The back plate has a hook, which resembles the hook used during the Initial Male Era in place of the later sword carrier.[8] When the sword is sheathed in a carrier, it enters a slot. Inside the blade passes through the hook and is thus secured. 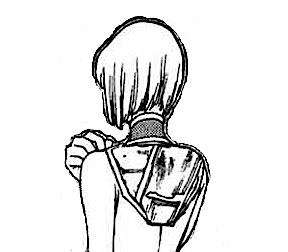 Sword hook on back plate

The shirt and leggings are worn without extra pieces of armor by trainees[9] and off-duty Claymore warriors.[10]

Retrieved from "https://claymorenew.fandom.com/wiki/Shirt_and_leggings?oldid=60284"
Community content is available under CC-BY-SA unless otherwise noted.