Renée regains consciousness. She hangs from ceiling of castle cellar. Her right arm is missing. Below sits Riful.[9]

Renée sees both her legs missing—she screams in terror. But Riful tries to be cordial and offers to let Renée reattach her limbs and even go free if she cooperates. Dauf drags in a strange object covered in chains. He raises it in front of Renée.[10]

As Galatea speaks with Father Vincent, Clarice chases Miata, trying to escape a bath. Vincent is unsurprised by Miata's stigma, which in turn surprises Galatea.[11]

Atop a city battlement, Miria notices Clare's restlessness. Miria tells her and the other Ghosts that the upcoming battle with the Organization and the Abyssal Ones will likely be the last. But before then, everyone should take care of their personal affairs.[12]

Helen wants to revisit her hometown in Mucha. Deneve agrees to accompany Helen.[13] 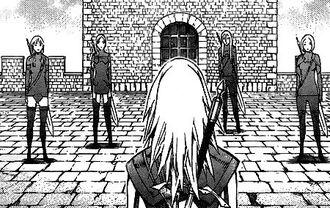 Tabitha says she will stay in Rabona with Miria. Miria then assigns Cynthia and Yuma to accompany Clare, much to Clare's chagrin.[14]

Back at Riful's cellar, Renée gazes in horror at the fused bodies of Luciela x Rafaela. Riful tells Renée of her goal to awaken the entity. Or destroy it if it promises to be more powerful than herself.[15] 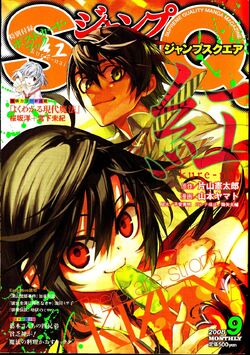 Retrieved from "https://claymorenew.fandom.com/wiki/Scene_82?oldid=60088"
Community content is available under CC-BY-SA unless otherwise noted.