Miria tells of the mainland war, where special soldiers are sent deep behind enemy lines.

There, these soldiers would release their Yoma energy and become awakened beings and fight the tribe known as the Dragons' Descendents.[9]

The soldiers would not be permitted to return home, as they could endanger the Anti-dragon allies. Once awakened, they are to fight the Dragons to the death. 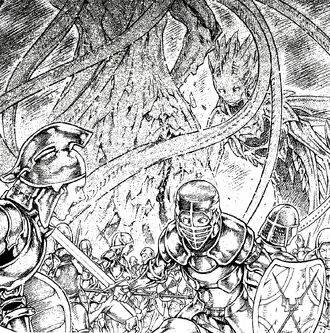 But so dangerous are these soldiers to their own troops, further research was needed to create more controllable awakened—hence the experiments on this isolated island.[10]

Miria reveals the Organization has partially succeeded with warriors No. 1 and 2, Alicia and her twin sister, Beth. When Galatea asks how Miria came by her extensive knowledge, Miria admits to having help, but refuses to give away her sources.

When Galatea asks how she may help the group, Miria puts her in charge of Clarice and Miata.[11]

Accompanied by Cynthia and Tabitha, Miria negotiates with Father Vincent in the cathedral.[12]

Meanwhile, Deneve, Helen, Yuma and Clare celebrate at a local tavern with Galk and Sid. On questioning, Sid reveals to Clare that an adult Raki, accompanied by a young girl, was in town. He was looking for Clare.[13]

Galk assures Clare that she and Raki must find each other, someday.[14]

A cloaked man and child show up outside the village of Doga. A passing man on a horse-drawn wagon warns them that a Yoma is in the village. But the cloaked man proceeds.[15]

In Doga, he comes across a crowd of onlookers in the street. The small child on his shoulder points out to a man named Lero. The cloaked man in armor now wields his broadsword and cuts off Lero's left arm, who attacks with extensible claws. But the cloaked man deflects them with vambraces.[16]

The cloaked man cuts the Lero's head in half. As the Yoma dies, he grabs and tears away the cloak—the man in armor is Raki.[17] 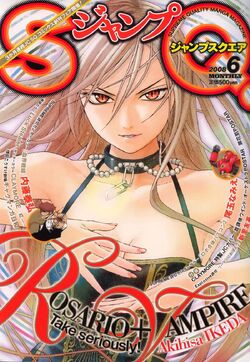 Retrieved from "https://claymorenew.fandom.com/wiki/Scene_80?oldid=60086"
Community content is available under CC-BY-SA unless otherwise noted.