At an Executive meeting, Limt notes how well Clarice has stabilized the mind of Miata. He gives them a new assignment—the purge of Galatea for desertion.[10]

Clarice protests at this. But Limt insists Clarice can do the task with Miata's help.[11]

On the campus of headquarters, Clarice's supervisor outlines the combined covert operation and purge. Rado intructs both Clarice and Miata to take suppressant to hide their Yoma aura from Galatea.[12] 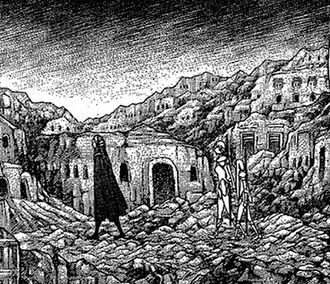 When Clarice asks how will they find their target if their own powers of aura detection is suppressed. Rado say Miata's "Sixth Sense," a heightened version of human five senses, will find Galatea.[13]

Later in the deep wilderness, a Winged Yoma attacks Clarice. But Miata easily destroys it.[14]

Then a Yoma pack attacks. When they pile atop Miata, she tears through their bodies. She pursues a pair of fleeing Yoma, punching one through the neck, then tearing off the head of the other.[15]

Clarice and Miata finally arrive at the Holy City of Rabona. Miata can smell Galatea's presence.[16]

This is the last regular scene that appears in Monthly Shōnen Jump. Jump ceases publication with the July 2007 issue. A miniature model—a "Special metallic-tone Claire Claymore"—is included in an appendix box as a farewell present. 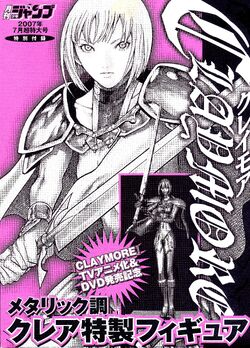 During the 5-month, July–November 2007 hiatus, four "Extra Scenes" appeared monthly in the Weekly Shōnen Jump. These are gaiden and not part of the main narrative of the series.

But the narrative eventually migrates to the Jump SQ December 2007 issue (Scene 74).

Small images of Clare and the miniature model appear on the front panel of the cover. 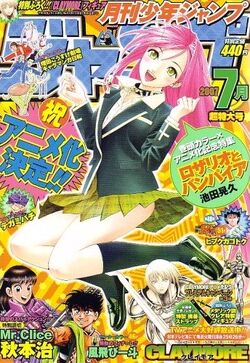 Retrieved from "https://claymorenew.fandom.com/wiki/Scene_73?oldid=57396"
Community content is available under CC-BY-SA unless otherwise noted.