Clare asks Riful what happened during the 7-year timeskip. Riful will only answer if Clare agrees to join Riful in her battle against Isley. Clare says she will consider the offer.[8]

Riful describes how Isley split the Northern Army into two groups. 12 traveled west and 11 traveled east. All were destroyed. When Clare asks about the ones who went east, Riful reveals a new kind of warrior, a new Creature of the Abyss.[9]

Riful describes her first meeting with Priscilla in Mucha. After gauging Priscilla's true power, Riful realizes that the story of Isley defeating Priscilla is false. Priscilla is stronger than any Abyssal One.[10] 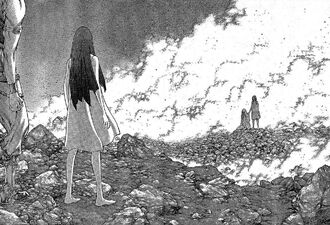 After Clare learns what she wants, she flees Riful.[12]

Clare appears on the front panel of the cover. This artwork appears in its original form on p. 060 of Memorabilia. 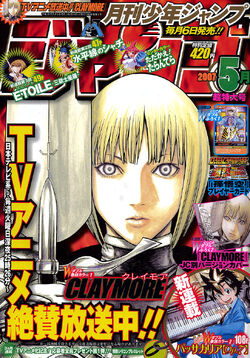 Retrieved from "https://claymorenew.fandom.com/wiki/Scene_71?oldid=60082"
Community content is available under CC-BY-SA unless otherwise noted.