Rachel, with her sword, appears to split Riful's body.[6]

As Rachel continues striking, Audrey attacks Riful's "wound." But Riful's split sections prove to be her true form—not something created from sword blows. This scene is similar to Scene 49.[7]

Riful decides the warriors' sensing ability is too low for her needs. She impales Rachel and hold Audrey in bondage, intending to dispose of them both.[8] 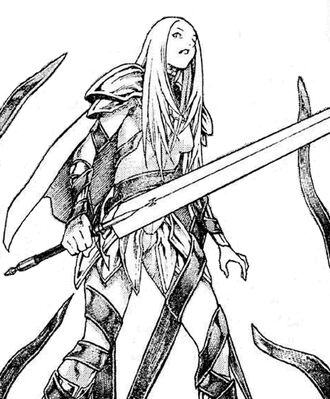 Riful begins to slowly cut Audrey, giving Audrey the choice of either awakening at the point of death or dying.[9]

The two other hunt members argue as what to do. But they are knocked unconscious by the Ghosts, who then rescue Audrey and Rachel.[10]

While three of the Ghosts flee with their rescuees, one Ghost stays behind, much to Riful's surprise—Clare.[11]

Clare appears on the front panel of the cover. This artwork appears in the original black-and-white on p. 048 in Memorabilia. 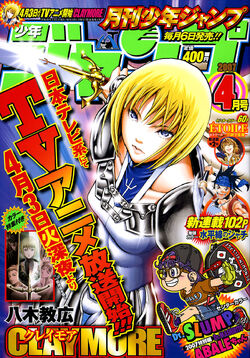 Retrieved from "https://claymorenew.fandom.com/wiki/Scene_70?oldid=60081"
Community content is available under CC-BY-SA unless otherwise noted.