In the central region of Toulouse, Audrey's hunt takes a break after killing an awakened being. Audrey and Rachel discuss the failed hunt led by Nina. Rachel notes how the hunt members were mysteriously rescued by persons unknown. Rachel jokes that ghosts from the Battle of the North are responsible.[8]

Clarice reports to Chief Limt at an Executive meeting.[9] 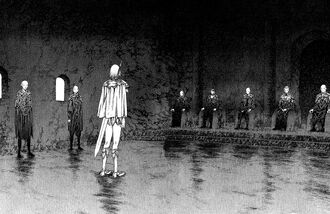 
Clarice describes the mysterious diappearance of the awakened beings that attacked the hunt. Only pools of blood were left behind. And that of the 24 members of the original Pieta battle group, she only counted 17 swords as grave-marks. Seven swords are missing.[10]

Everyone but Rubel dismisses the possibility of survivors. Rubel cannot believe that Miria would allow herself to be killed. In the end, Clarice's report is ignored. Limt replaces Nina with warrior No. 7 (Anastasia, unnamed).[11]

After the meeting, Rado, Clarice's superior, orders her to report to No. 4, Miata. Clarice is to serve as Miata's assistant.[12]

They bask in warmth and sunlight. But their joy is interrupted by Tabitha, who detects an awakened hunt nearby. And a very powerful awakened being.[14]

Small image of Clare appears on front panel of cover. 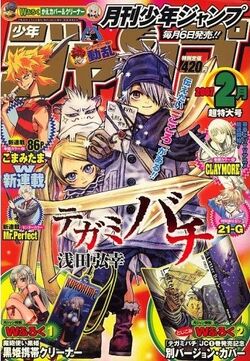