Clarice counts the grave-marks of warriors from the Battle of the North. She counts 17 swords. From the hill above, Miria, Deneve and Helen watch.[7]

Cynthia and Tabitha rejoin the group after giving first aid to the other three Dabi hunt members. They argue about what to do with Clarice, but Miria in the end decides to do nothing.[8]

In Pieta, before the second and last engagement, Miria holds her final meeting with the battle group. In the banquet hall of the Eastern Inn, she instructs everyone to take one half of a suppressant pill.[10] 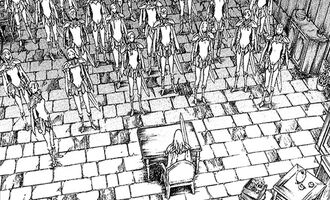 If during combat, a warrior loses consciousness, she can "play dead" to both the Northern Army and Organization. All the warriors agree to the plan and touch swords.[11]

Amid the ruins of Pieta, the bodies of Queenie, Eliza, Lily and Wendy lie dead. The survivors help up Miria, who grieves that only seven out of 24 warriors survived.[12]

Clare and Yuma come across a deserted village. Clare kicks open a door, leading to an underground slave prison. She further discovers an anomaly in one of the cells, telling her that Raki was here.[13]

Clare on front panel of cover. Artwork reproduced in original form on p. 061 of Memorabilia. 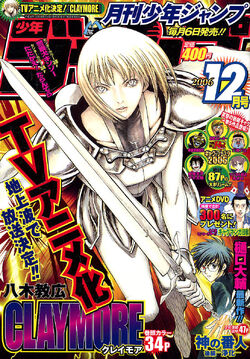 Retrieved from "https://claymorenew.fandom.com/wiki/Scene_66?oldid=60077"
Community content is available under CC-BY-SA unless otherwise noted.