Deneve and Clare attack. Clare lets her arm go berserk, Armadillo unable to control the uncontrollable. He spring out his quills, destroying Deneve's hip and abdomen.[8]

Deneve regenerates her wounds at hyper-speed. Then she cuts halfway through his neck, but cannot cut all the way through. Undine, with her Twin Sword technique, pushes Deneve's sword through, decapitating Armadillo.[9]

The disembodied head makes a getaway, while trying to awaken Wendy and Yuliana and turn them into awakened. But Flora and Clare chop the head apart midair.[10]

Clare panics when she realizes that Miria is alone with her team. But her comrades are unconcerned, as Miria is a No. 6.

Elsewhere in the village, Miria decapitates the head of teh Dreadlock awakened. By the time Clare and her comrades arrive, the combat is over.[11]

Tabitha carries Yuma, who lost her left arm. When the battle group reassembles, Undine argues that Miria's plan will fail and that everyone will be killed.[12] 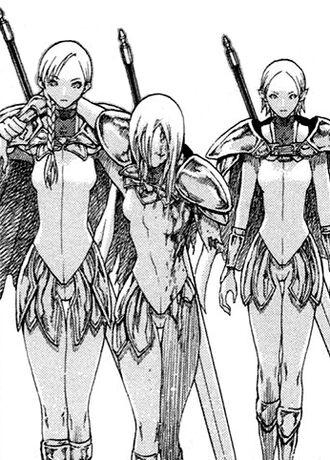 Flora argues back that the plan succeeded as there have been no fatalities, plus even the higher-number warriors gained experience fighting awakened.

Undine demands the location of the extra supplies from Cynthia, who meekly directs Undine to the shed behind the Eastern Inn. Undine leaves in a huff. Miria is concerned that Undine has realized what Miria earlier told her comrades in the cavern—that the battle plan has no chance of success.[13]

In the supply shed, Deneve ignores Undine's pleads for privacy and enters a room. She discovers Undine's true physical form. A frail, deflated Undine shivers in the cold while trying to recover from her combat injuries.[14]

Flora orders Clare to the outskirts of the village. Flora apologizes, but says they need to spar.[15]

Clare appears on front panel of cover. This illustration is reproduced on p. 020 of Memorabilia 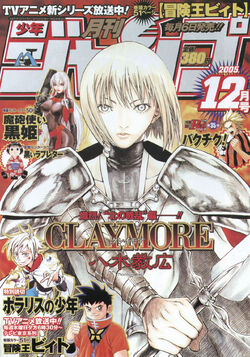 Retrieved from "https://claymorenew.fandom.com/wiki/Scene_54?oldid=57362"
Community content is available under CC-BY-SA unless otherwise noted.