During a blizzard in the northern region of Alfons, an awakened hunt faces an unseen enemy. The captain, Eva, orders a retreat.

Beside her, Lucia who reports that Kate is down, is struck down in an explosion of blood.[8]

Lucia's body lies in the snow as Eva and another warrior retreat before an advancing group of awakened beings.[9]

Despite Clare's rebuffs, Jean insists on stalking her though the forest. Jean wants to repay Clare for saving her life. Clare cuts down the trees before them with Quicksword. Clare says the "debt" was repaid when Jean's willpower inspired Clare to control Quicksword by using hers. But in doing so, Clare discovered she could guide her sword by sensing the Yoma aura of the target.

Suddenly, a Claymore warrior confronts them. She has one eye missing. She asks which is Clare.[10]

Jean is confused as she failed to sense the warrior's aura. But Clare recognizes the warrior's symbol—Rafaela. Then Rubel steps out in the open behind Rafaela.[11]

Rubel reveals that Rafaela excels in hiding her presence with a near-undetectable aura. Also, that she can defeat both Clare and Jean. Rubel further intimidates them by pretending that Galatea was beheaded for making a false report.

Now Rubel makes an offer that Clare cannot refuse. Because Clare aided everyone at the Witch's Maw, the Organization is willing to pardon her for desertion, provided she join a battle group assembling up north.[12] 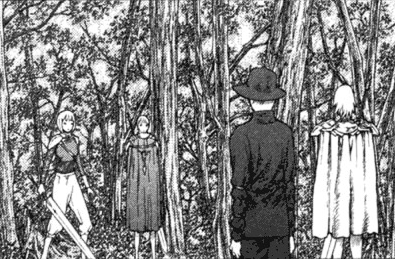 As an incentive, he adds that Raki was captured by a slave trader and taken up north. Rubel gives Clare a choice—either stay south, awaiting being purged, or go north and join the battle group, along with the possibility of finding Raki.[14]

Clare and Jean find themselves in Pieta, the southmost village of Alfons. The battle group is assembling in the snowy plaza. Suddenly, a warrior out of nowhere attacks Clare.[15]

Enraged by this stranger, Jean counterattacks, sending Helen into full retreat. But before Jean can further attack, Deneve stops Jean cold. Deneve says Helen is only joking and that Jean should mind her own business. When Jean reveals her rank as No. 9 and that she is friends with Clare, apologies go all around the four warriors.[17]

No. 8, Flora, opens the meeting. At first Helen thinks Flora is the battle group commander. But Flora says "There's even a lower number here than me."[18]

The real commander appears—No. 6, Miria. She greets her three friends and is pleased that everyone is still alive as promised in the Paburo Mountains.[19] 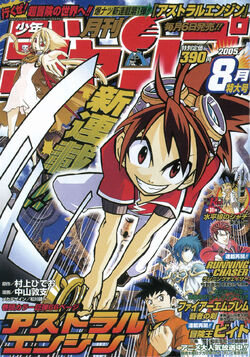 Retrieved from "https://claymorenew.fandom.com/wiki/Scene_50?oldid=57274"
Community content is available under CC-BY-SA unless otherwise noted.