A disguised Clare meets five men in the Zakol Mountains. Inexplicably she attacks the men with her sword and kills three of them.[7]

By land and by air[edit | edit source]

The remaining two men suddenly awaken into Yoma. Clare dodges their attack by jumping skyward. But two Winged Yoma swoop down from above.[8]

Using her instant aloft, Clare shreds them both and falls back to earth, where she shreds the two remaining Yoma. As their bodies fall apart, they taunt Clare by saying she is seeking her own death.[9]

In a castle cellar, a mysterious young girl on a throne supervises a thuggish man, Dauf, in awakening the captured Claymore warriors. Dauf extrudes a rod, which he drives into the bodies of the captives.[10] 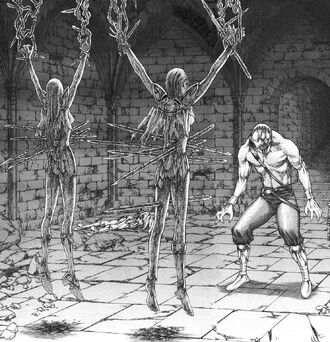 One hunt member, Raquel, lies dead facedown in the corner. The two remaining warriors, Jean and Katea, are hung by their wrists from the ceiling.[11]

Katea awakens into a mosquito-like form, despite Jean's pleads to resist. Dauf tests her strength, but Katea's attack on Dauf appears ineffectual. Katea is another failed creation.[12] To Jean's horror, Riful orders Dauf to destroy Katea. Clasping his hands into a giant fist, Dauf smashes Katea to pieces.[13]

Outside the castle, Clare approaches the entrance.[15]

Retrieved from "https://claymorenew.fandom.com/wiki/Scene_42?oldid=60252"
Community content is available under CC-BY-SA unless otherwise noted.