No cold open. Color plate of Clare dappled in shadows from the original magazine publication.[9] 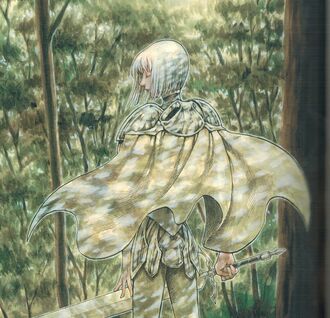 At Organization Headquarters in the eastern region of Sutafu, the Executive meets with Rubel. The awakened body of Ophelia has been found in the mountains beyond Gonahl. The chief, Limt, asks if Clare killed Ophelia. Rubel expresses doubts about Clare's ability to do this.[10]

Executive members debate whether Clare's transplant of Teresa's flesh and blood succeeded or not.[11]

In unnamed town (named Hamel in the anime), Clare searches for Raki. She checks in at a local inn. From up in her room, she watches the Zakol hunt leaving town.[14]

Despite Clare's suppressant, the hunt leader (Jean) detects Clare's presence. But Jean shrugs it off as her imagination.[15]

Clare gets up early. The innkeeper tells her the Claymores left for the Zakol Mountains. Clare resumes her search before they return.[16]

In town, she comes across two children arguing about a Teresa and Clare statue. They mention talking to a stranger. When Clare asks the young girl, Sister, about the stranger, Sister describes someone resembling Raki, who asked about the statue.[17]

When Sister asks who the stranger is, Clare says that he is someone very important to her and that she would risk her life to find him.

A woman screams. A fatally wounded, unnamed warrior staggers into town. As she falls, Clare catches her.[18] 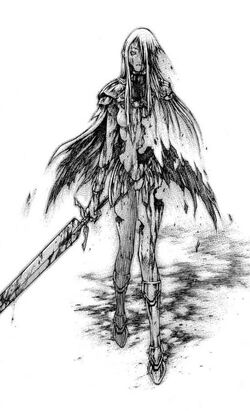 The warrior tells Clare that the hunt was captured. Before she dies, she realizes Clare is a sister warrior.[19]

Clare asks the townspeople to give the warrior a human burial. When a man warns against going to the mountains, Clare sheds her disguise.[20]

Retrieved from "https://claymorenew.fandom.com/wiki/Scene_41?oldid=60248"
Community content is available under CC-BY-SA unless otherwise noted.