Despite the physical damage to Ophelia, Clare cannot control her new arm. Her sword slips from her grasp.[7]

Ophelia realizes the arm belongs to the unknown woman (Ilena) who attacked her earlier. And that Clare is having trouble controlling the arm.[8]

Ophelia decides on another "contest." If Clare can cut her way through the awakened part of her body, she can do what she wants with the remaining human part of Ophelia at the tail-end.[9]

Ophelia has a flashback about her older brother, who held off Priscilla while Ophelia escaped.[10]

During the contest, Ophelia halfheartedly fights Clare. She pierces Clare's body. When Clare appears to give up, Ophelia angrily demands that Clare keeps fighting, or who else will kill Priscilla. Clare cuts herself free and shreds most of Ophelia's awakened body.[11]

Now only the upper human torso remains. Ophelia orders Clare to kill her before she regenerates.[12]

Clare, dispirited, runs through Ophelia with her sword.[13]

As Ophelia fades away, she remembers her brother's sacrifice and realizes why she tried to forget that night with Priscilla.[14] 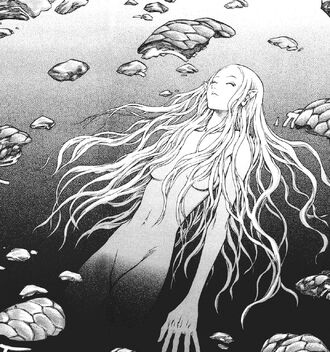 Retrieved from "https://claymorenew.fandom.com/wiki/Scene_40?oldid=60238"
Community content is available under CC-BY-SA unless otherwise noted.