Clare flees "due north" with Raki through a Lautrec forest as Ophelia combats the Former Single-digit awakened.[7]

In the ruins of Gonahl the combat continues. Single-digit finally outmaneuvers Ophelia and catches her unawares, then twists and breaks Ophelia's neck. She thinks Ophelia is dead and casts her aside.[8] 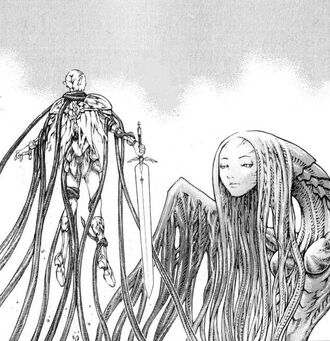 But Ophelia springs to life and decapitates Single-digit. The head of Single-digit is still able to speak. When she denounces Ophelia as the monster, Ophelia slices up the head like a meatloaf.[9]

Clare senses Ophelia's victory. Only a short time exists before Ophelia finds them. In a drastic decision, Clare orders Raki to flee to the "northwest," while she lures Ophelia in the opposite direction to the "northeast."[10] In reality, such directions would put everyone in the ocean. See Notes below.

Raki protests, wanting to stay with Clare. But she gives him a "shut-up kiss," saying three things: be quiet, that she cares for him, and farewell.[11]

She promises to stay alive and search for him.[12] Finally, he relents and flees with Galk's sword.[13]

Meanwhile in Gonahl, Ophelia fixes her neck. Now she is ready to hunt Clare.[14]