The young girl changes into the Former Single-digit awakened, as Ophelia, Clare and Raki watch. The awakened shapeshifts into a squid-like form with kneeling humanoid legs.[7]

The Single-digit suddenly appearance interrupts Ophelia's sword-fight contest with Raki. The Single-digit's tentacles try to crush the two Claymore warriors, but they dodge them.[8]

Clare's one leg is still is not reattaching. But Ophelia acts as she is concerned about the Single-digit, only to perversely throws Raki to the awakened. Ophelia holds Clare face-down as Raki is about to be eaten.[9] 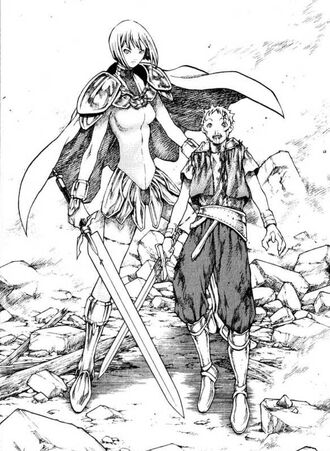 Ophelia now realizes that Clare really is "awakened." Clare orders Raki to hold on tight to to her breast. She flees Gonahl with Raki hanging on, while the combat continues to rage between Ophelia and Single-digit. Already deep in the forest, Clare even now senses that the fight will soon be over—in Ophelia's favor.[11]

Retrieved from "https://claymorenew.fandom.com/wiki/Scene_33?oldid=60303"
Community content is available under CC-BY-SA unless otherwise noted.