In an unnamed town, Clare uses her sensing to anticipate the moves of three attacking Yoma, whom she quickly dispatches. The Raki and the townspeople are amazed.[7]

As Clare and Raki leave town, he comments enthusiastically on how effective Clare has recently become.[8]

In the Paburo Mountains, Miria advises Deneve, Helen and Clare to hide any suspicion from the Organization that the mission was a deliberate trap. Also, to change their public image as troublemakers.[9]

Clare has her routine night meeting with Rubel. He comments on how well-behaved Clare has been lately. He assigns her to the Gonahl hunt. The target is a Former Single-digit warrior.[12]

After traveling to the north coast of Lautrec, Clare and Raki finally reach Gonahl. There they find Ophelia waiting in the plaza of the ruined city.[13] 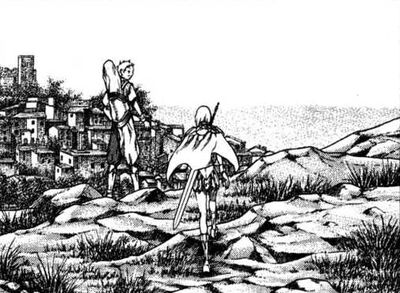 End of the continent

But Ophelia suspects Clare is awakened. She grabs Clare from behind and penetrates Clare's stigma with her fingers. She tastes Clare's blood and confirms Clare's awakening.[14]

But Raki attacks Ophelia with his Rabona sword, wounding her in the arm. He threatens to run her through. But Ophelia gratuitously tastes her blood and offers Raki a chance to be bathed in his own.[15]

Retrieved from "https://claymorenew.fandom.com/wiki/Scene_31?oldid=60221"
Community content is available under CC-BY-SA unless otherwise noted.