In a flashback, Miria relives the night she unknowingly killed her best friend during an awakened hunt. After her friend dies, a grieving Miria nearly awakens herself.

Ophelia (unnamed) appears out of nowhere and waits for Miria to fully awaken, the implication being that Ophelia wishes to fight the awakened Miria.[8] 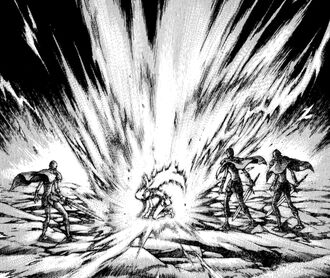 Back in the Paburo Mountains, Miria suspects that she, Deneve, Helen and Clare are partially awakened even now. Miria also claims she has discovered the Organization's greatest secret.[9]

Beyond the Paburo Mountains, a statuesque Claymore warrior remote views the Paburo hunt.[10]

Ermita listens to her report. Her Wide Area Sensing is so acute, she reads the thoughts and emotions of the party. She notes unease as Miria speaks. And even a tragic event in Clare's past.[11]

Miria notes that whether the four warriors can continue to control their awakening remains to be seen.

Deneve's wound is serious. If she awakens and heals her wound, she may not be able to return. In that case her companions are to kill her. But if she does nothing, she dies anyway.[12]

Deneve awakens, Helen and Clare ready to behead her if she cannot return.[13]

The Organization's Eyes, named Galatea, notes more unusual activity among the hunt, but is uncertain what is happening.[14]

Elsewhere, Galatea reports that all members of the hunt are all right. Disappointed, Ermita warns that Galatea may cross swords with them someday.[16]

Retrieved from "https://claymorenew.fandom.com/wiki/Scene_30?oldid=59959"
Community content is available under CC-BY-SA unless otherwise noted.