A masked figure is seen struggling in the desert. But the figure collapses. The silhouette of a Claymore warrior watches in the background.[5]

The young boy from Doga, Raki, wakes up in a strange bedroom. But the inn-keeper, who brings in food, tells Raki that he is at the Egon village inn. And that a Claymore brought him here and paid for his room.[6]

Raki assumes Clare rescued him. After bolting down some food, he searches for her. A stranger tells him that a Claymore is looking for him. But that she left town and went into the forest.[7]

In the forest, Raki meets a female in a Claymore uniform.[8] But when she refers to herself as a Claymore, Raki remembers what Clare told him in Scene 1—the Organization warriors never call themselves "Claymores."[9] The impostor awakens into a Yoma. The Awakened Claymore takes Raki hostage and tells Clare come out of hiding.[10]

Clare reveals herself. She complies with the Yoma's demand that she throw away her sword. Then the Yoma attacks.[11] The Yoma punches his arm through Clare's abdomen, but Clare carries the Yoma down a cliff. At the bottom, Clare retrieves her sword and slashes off the Yoma's arm, then skull-cap.[12]

Clare pulls out the amputated arm. She uses her Yoma power to regenerate and close the wound.[13]

She tells Raki that she only acted to kill the Yoma, not to save him. But she does ask him if the village exiled him. At first he tries to deny it.[14] But Clare has a flashback. As a very young girl, a Yoma-infected brother killed her parents and then was about to kill her, when an unknown Claymore warrior decapitates him.[15] 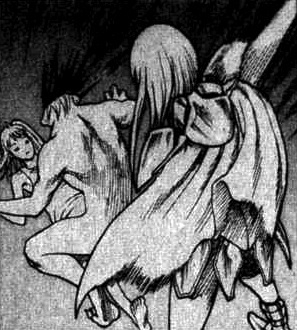 Overheard adult voices imply Clare was exiled, due to fears she was also a Yoma.[16]

Clare asks Raki if he can cook. He says yes and Clare offers him a "job" of being her personal cook, till they find a new home for him.[17]

The front panel of the September 2001 Monthly Shōnen Jump reproduces the color plate of Clare from Scene 001. This illustration is reproduced on pp. 002–003 of Memorabilia. 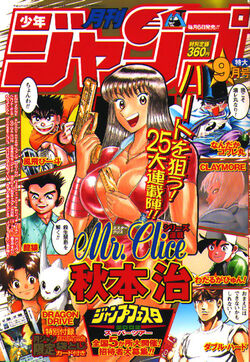 Retrieved from "https://claymorenew.fandom.com/wiki/Scene_3?oldid=60468"
Community content is available under CC-BY-SA unless otherwise noted.