Helen is surprised that the Paburo awakened is male. She expected a former, female Claymore warrior.

Seeing an impending attack, Miria warns everyone to get out of harms-way—but Deneve is hit.[7]

Paburo severs Deneve's arm. Deneve plunges into the canyon river below. He tries to eat the arm, but spits it out as it tastes of Yoma.[8]

Enraged, Helen attacks but he dodges her moves. Clare tries to help, but Paburo encoils and captures her with his tongue and smashes her into the canyon wall. 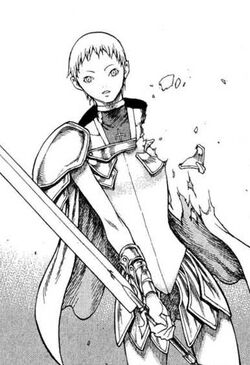 But Deneve suddenly returns to the fight, her arm also regenerating. Miria notes that Deneve's regenerating technique and Helen's limb stretching means that both are approaching the limits of their Yoma power.[10]

When Helen asks why this awakened is male, Miria reveals that the first Claymores warriors were male, but that the Organization stopped making them, as they awoke too quickly.

The male warriors were retired as awakened beings and replaced with female warriors. The Paburo awakened tells Miria that he heard that she, No. 6, has extensive knowledge. But she made one mistake in her explanation.[11]

The hunt members are all slated for execution. And that the awakened is actually an executioner for the Organization. The entire mission was a trap.

Paburo promises to give them "a taste of true despair." During his attack, Deneve, Helen and Clare all go down—Miria is the last one standing.[12]

Retrieved from "https://claymorenew.fandom.com/wiki/Scene_27?oldid=59986"
Community content is available under CC-BY-SA unless otherwise noted.