A young woman flees a Yoma up the slope of a hill. But he jumps ahead of her and stops the woman in her tracks. In terror she falls back on her buttocks.

The Yoma is about to attack when a Claymore warrior lops off his skull cap.[6]

The woman is from Toriro village. She tells the three warriors that a lone warrior there is fighting five Yoma.[7]

The captain of the Toriro hunt says that a Voracious Eater may be among the Yoma. And their orders are to search the village with all four warriors present.[8]

When they reaches Toriro, all the Yoma are dead. Clare admits preceding on her own. The Yoma were of the common variety. One warrior (Queenie) accuses Clare of seeking glory.[9] The hunt captain states her intention to report Clare for disobeying orders.[10] 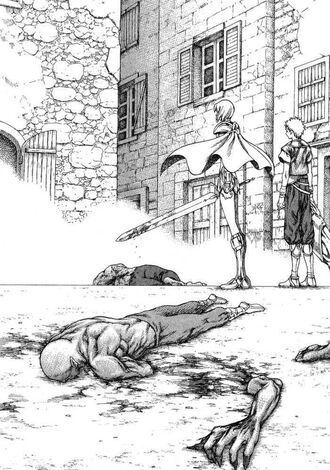 Clare and Raki in Toriro

The three warriors leave. When Raki asks about Voracious Eaters, Clare says they are an older and more intelligent kind of Yoma.[11]

Later that night, Clare meets Rubel, who reveals the truth about "Voracious Eaters." The phrase is intended for use outside the Organization.[12]

Within the Organization, these special Yoma are called "awakened beings." They are former Claymore warriors that have awakened. Rubel notes that Clare wants to kill Priscilla.[13]

Since Clare wants practice fighting an awakened being, Rubel assigns her to the Paburo hunt.[14]

Clare and Raki enter an unnamed city in a valley of the Paburo Mountains. A Man in Black, Ermita, intercepts Clare and Raki and leads them to a house, where in a darkened room the other hunt members nap.[15]

Miria says the target is in Paburo Mountains. She has everyone introduce themselves and their experience in hunting "Voracious Eaters." When Clare reveals she is No. 47, Helen and Deneve laugh.[18]

When Raki angrily confronts Helen, she explains how the island continent is divided into 47 districts, each with an assigned warrior. Of all the 47 warriors on duty, Clare is the weakest.[19]

Retrieved from "https://claymorenew.fandom.com/wiki/Scene_25?oldid=60157"
Community content is available under CC-BY-SA unless otherwise noted.