At unnamed village, Clare attends meeting with village chief. Suddenly, Clare lops off his skullcap with her sword. Villagers look on in horror.[6]

The dying "man" awakens into a Yoma, his nails lengthening into claws. He confesses thinking he hid his Yoma aura from Clare. And thus was about to attack. But she sensed his true nature and struck first, using his very Yoma qualities against him.[7]

After he dies, Clare tells the villagers that a stranger will come collect the fee.[8]

As Clare bathes at a waterfall, a bespectacled Man in Black, Rubel, advises that she can never wash off the Yoma scent, since her own body produces it.[9] This may allude to the unhealable stigma. 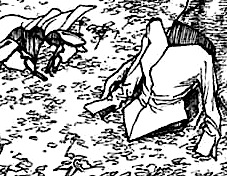 He gives a new assignment—the village of Strah. 27 people have died—sign of a Yoma pack at work. He advises her to wait five days for reinforcements, but Clare expresses concern about deaths in the meantime. She goes alone, despite the dangers. This behavior persists in future scenes.[10]

When Clare arrives, the villagers remain hidden behind closed doors. But a man meets her in the street. [11] Clare knows he is a Yoma. Then four Yoma surround her.[12] Then he mentions a fifth Yoma. Suddenly from the sky, a Winged Yoma strike.[13]

Clare slashes in half three Yoma. She suspects they must be weak if they have to hunt in a pack.[14] She kills the leader, still in human form. Then using a thrown sword technique, she hurls her sword skyward to kill the Winged Yoma.[15] 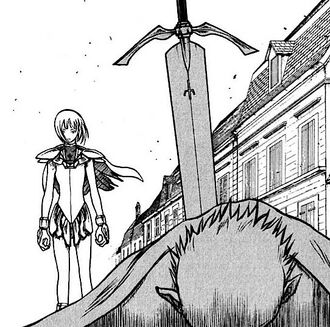 Despite the demise of the Yoma, the villagers stay hidden. Clare repeats her standard line about the fee.[16]

Clare rendezvous with Rubel. He remarks on the villagers' ingratitude, despite Clare risking her life. And that Clare wants to help others, due to her emotional past. But Clare admits nothing.[17] 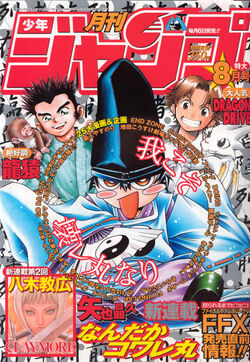 Retrieved from "https://claymorenew.fandom.com/wiki/Scene_2?oldid=60467"
Community content is available under CC-BY-SA unless otherwise noted.