Teresa dreams of an earlier life, either real or imagined, where she had black hair and eyes. She further dreams of betrayal, being sold to the Organization by those she trusted.[5]

She either had to become a tool of the Organization or die a beggar.[6]

At a local inn, Teresa cannot continue her afternoon nap, the bed being too comfortable. She gets up and dresses. She stakes her sword in the floor against a dresser and leans on it. When the inn-keeper knocks on the door to announce dinner, Teresa destroys the door with her sword. She tells the terrified inn-keeper that she is leaving.

When Teresa exits the inn before sunset, the villagers are surprised as they thought she would stay overnight. A village representative, an elderly man, offers her money that the village collected. Teresa refuses it, saying that the order to suppress the Yoma came from a neighboring village.[7] 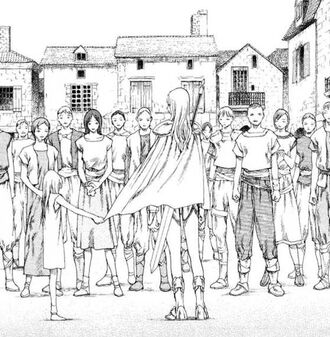 As Teresa and the elder speak, the mystery girl tugs Teresa's cape. Teresa kicks the mute girl away. When Teresa asks about the girl's past, the elder speculates that the girl was forced to accompany the Yoma posing as a parent.

Teresa suspects the girl thinks Teresa is a sort of savior.[8] Despite Teresa again kicking her away, the girl persists in being demonstrative. The villagers fear the girl is about to be killed.[9]

In a forest, the girl spies on Teresa's camp. But Teresa disappears from the campfire, then just as suddenly appears behind the girl. Teresa tries to frighten the girl by suspending her sword blade over the girl's shoulder. Suddenly, thuggish-looking men descend from the trees branches above. They are bandit gang lead by "Boss."[10]

Teresa cut off the hand of one bandit, Rig, who tries to grab the girl. Teresa offers her body to the bandits, but when they see the stigma on her abdomen, they leave appalled. Rig promises to take revenge.[11] 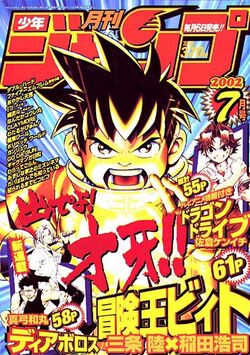 Retrieved from "https://claymorenew.fandom.com/wiki/Scene_13?oldid=60471"
Community content is available under CC-BY-SA unless otherwise noted.