From a battlement, Raki's is interrupted while watching the Destroyer–Priscilla entity fight itself in the hills. Chronos and Lars have appeared. Chronos wants to question Raki.[5]

Chronos notes Raki's unusual physique and matching sword technique, both designed to fight Yoma entities. Raki admits that his mentor was Isley, who he met in the north.[6]

Chronos details Isley's history as warrior No. 1 of the male era. He further speculates that Isley awakened in order to destroy the previously awakened male warriors in a series of stratagems.[7]

Chronos reveals Isley's death being due to weapons of the Organization. This confirms Raki's suspicion that during the Mucha interlude, Isley decoyed something away (Abyss Feeders), so Raki and Priscilla would be left unharmed.[8] 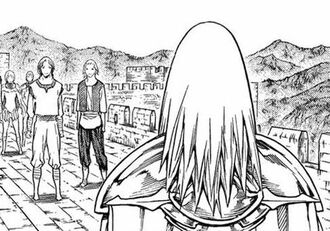 Chronos wonders why Priscilla, after being freed from the Yoma cocoon, made for the awakened beings in the hills, and not Raki and the Ghosts. He guesses that Raki's presence is what prevented an attack. And that Raki's silence indicates a previous relation with Priscilla.[9]

Miria demands to know why Chronos and Lars came here after escaping Priscilla. Chronos replies that only nine awakened survived, but that Octavia's party is getting hungrier by the moment—the Ghosts should beware of them.[10]

Miria taunts them by implying that they fear Priscilla to the point of abandoning all the human food on the island to her. Lars begins to awaken in anger, but Chronos sees through Miria's stratagem. But her comments serve as an opening to a proposal. She explains that Cassandra is under the spell of Priscilla. And that once Priscilla absorbs Cassandra, Priscilla shall defeat the Destroyer and dominate the island.

She reveals her scheme of breaking Priscilla's spell over Cassandra, then hoping Cassandra attacks Priscilla. With the combined strength of the Destroyer, Cassandra, the Ghosts and awakeneds, Priscilla could be defeated. But only if all those present cooperate.[11]

Unpersuaded, Chronos says he will rely Miria's plan to the female awakeneds. In any case, he will wait for Miria to act first. He says farewell to Raki, adding that if Raki's timing is right, he could be Priscilla's strongest opponent.

Cassandra travels through a valley, while Dae and Rubel, on horseback, follow on a mountain trail above. Dae says that Cassandra is heading for Rabona, where other awakened gather.[13]

Elsewhere, the bottom half of a female torso wanders through the forest (hence the Jump SQ title "The Wanderer"). When the torso stumbles and falls, bodily fluids and tentacles flow from the open cross-section. The fleshy strips form the head of a young girl.[14]

Chronos and Lars remotely sense the entity's aura. Chronos judges the aura is similar, but unlike that of Riful of the West.[15] 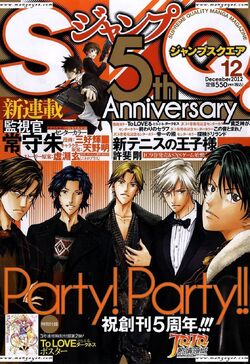 Retrieved from "https://claymorenew.fandom.com/wiki/Scene_132?oldid=60387"
Community content is available under CC-BY-SA unless otherwise noted.