In the original magazine appearance, when Clare ejects from the Yoma cocoon, Miria releases Yoma power beyond her limit, unleashing her quickest Phantom attack yet on the cocoon. But her target proves even quicker.[6]

Priscilla lands amid the startled awakened spectators in the hills.[7]

In the tankōbon version, the cold open opens with Raki embracing Clare,[8] overlapping the last panel of Scene 129.[9]

Miria never has an opportunity to attack Priscilla, who breaks free of the cocoon and lands among the awakened.[10]

Chronos notes the odd behavior of Priscilla, ignoring the easy targets among the Claymore warriors and the humans in the city.[11] 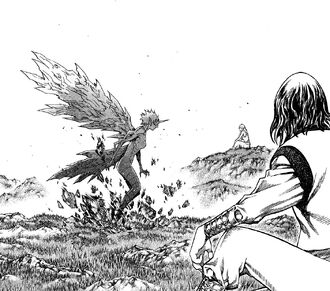 Chronos warns Lars to evade. Tentacles explode from Priscilla's position, hitting some of the spectators, who awaken into a myriad of forms. Octavia reveals her Double-helical Ability, uncoiling her tubular body in avoiding the tentacles. The Iron maiden awakens and splits open a teeth-lined interior, then counterattacks with tentacles of her own. Still another awakened reveals Swiss Army knife-like arms.[12]

One struck awakened shrivels up as life force is drained from her body.[13]

Chronos now realizes that the "attack" on the awakeneds is unintended. A new binary "entity," made up of the Destroyer and Priscilla, are resuming their combat fought elsewhere. But now the spectators are caught up in the maelstrom and becoming collateral damage.[14]

From a cliff, Galatea and the Ghosts watch the chaos in the hills. Deneve repeats Chronos' observation about two entities struggling for dominance—a creature surpassing a Abyssal One and a mindless thing that absorbs all life force it contacts. But regardless who wins, "Hell will arrive..."[15]

Deneve further notes that if Priscilla merges with Cassandra, the combat will end instantly in favor of Priscilla.[16]

Sheepishly, Clare shows up dressed in her old Claymore uniform.[17]

Clare recounts her childhood experiences with Teresa and how Priscilla lead the purge team, beheading Teresa and then awakening.[18]

But Miria gives back Clare's sword, found on the cocoon site. She disagrees that Clare must fight Priscilla alone. Clare and her comrades must fight the enemy together, as always.[19]

Yuma unintentionally repeats Tabitha's words[20] of wisdom as if her own, which Cynthia points out to Yuma's embarrassment. Then in a repeat of Scenes 31,[21] 51[22] and 130,[23] the warriors touch swords and vow to survive the final engagement.[24] 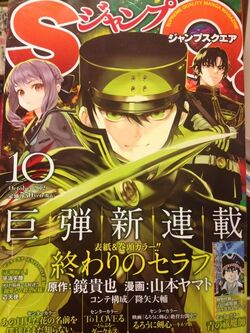 Retrieved from "https://claymorenew.fandom.com/wiki/Scene_130?oldid=60389"
Community content is available under CC-BY-SA unless otherwise noted.