Eventually, all the Ghosts appear atop a hill viewing the Holy City of Rabona.[8]

Helen notes that it took 10 days instead of 20 to return to Rabona.

Following Raki's plan[9] (trip not shown), the Ghosts traveled westward by boat, skirting around the peninsula of Mucha, then pushing north through the bay and upriver to Rabona. See world map.

Tabitha senses that Cassandra is six or seven days away. Miria thinks this is enough time to prepare for the awakened's arrival.[10]

Raki spots a young woman sitting hillside. When he suggests she accompany him and his companions to Rabona, she says the city is deserted. Deneve warns Raki away as this woman is an awakened being. Then Raki notices a dozen or so "humans" watching the city from the hills, all but two being female.[11]

Deneve says they are all awakened. Miria adds that they appear to be former single-digits with high baselines. When Miria accuses them of "disappearing" the inhabitants, Octavia suggests Miria ask the human guards and Miria's comrades as to what happened. Tabitha senses the auras of Galatea, Clarice and Miata are still inside the city.[12]

Helen asks why the gathering. A bearded man says they wish to see both the emergence of the strongest awakened being ever—and the faces of the warriors who destroyed the Organization. He refers to the Ghosts as a "rogues gallery."[13]

As the Ghosts leave, Miria identifies the bearded man as Chronos, the former No. 4 of the Initial Male Era. His male companion is No. 6, Lars. The woman Raki just spoke to is "Wild Horse" Octavia, No. 2. of an unnamed female era.[14]

Despite Chronos' confidence that the awakened can escape unharmed should the situation get out of hand, Miria has her doubts.[15]

Inside the deserted city, the Ghosts are greeted by a tearful Clarice, then Galatea, Galk and Sid. When Miria asks what happened, Galatea leads the Ghosts to the outskirts of town.[16]

The awakened form of the unknown Priscilla is half-emerged from the cocoon. Deneve confirms this is the awakened that she saw in Lautrec.[17]

Galatea explains what transpired during the Ghosts' absence. Miria now understands why Galatea had the city evacuated. But Galatea was unable to persuade the Rabona guards to leave. Miria calls for a meeting.[18]

That night in the town hall, Miria explains the situation to the Rabona guards and the Claymore warriors. But Sid insists that the human guards will stay and defend the city with their lives,[19] repeating what he said during the early Clare arc.[20] Miria apologizes for asking them to leave and even allows Clarice to stay.[21]

Then Sid tells Miria that upon Miria's request, he and the guards gathered something unnamed.[22]

Outside in the hills, Octavia's group, Lars and Chronos detect that Cassandra's speed is accelerating.[23] 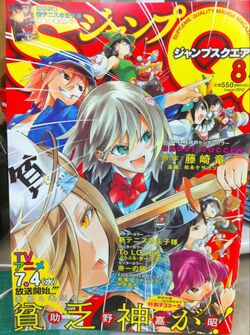 Retrieved from "https://claymorenew.fandom.com/wiki/Scene_128?oldid=60393"
Community content is available under CC-BY-SA unless otherwise noted.