Dae tells Rubel that he recognizes the phantasm—the former No. 2 Priscilla, who killed the then No. 1, Teresa. After Priscilla awakened, she was supposedly defeated by Isley in the northern region of Alfons.[6]

Dae intends to search for Priscilla. And invites Rubel to accompany him. Meanwhile, Miria, Deneve and Helen invade the Executive chamber.[7]

The warriors find it deserted.[8] In flashback, Raki says that the Organization fled Headquarters when Cassandra, Roxanne and Hysteria awakened.[9]

Miria orders Deneve and Helen to search the premises. And that any personnel found are to be killed.[10]

But Miria's orders are a ploy to distract her comrades as Miria relocates a pilastered portal. She forces open the wall panel, leading to a downstairs chamber, where a specimen of the Dragons' Descendents is chained. Tubes attached to the body provide life-support.[11]

Limt appears. For unexplained reasons, he has stayed behind. He notices that Miria appears familiar with the dragon. Then he points out the unawakened, humanoid form hanging high from the ceiling.[12] 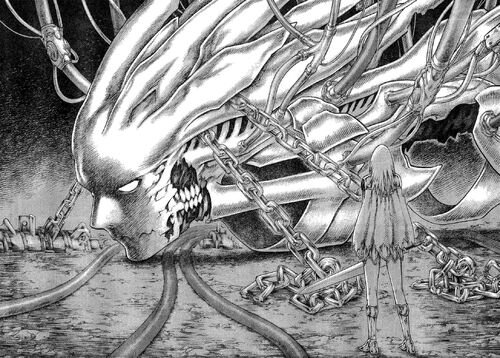 He reveals the true name of the Dragons' Descendents—the アサラカム[13] (Asarakamu). The Asarakamu are a hermaphroditic species. They have a lifespan of 200 years.[14]

The smaller, humanoid specimen, when awakened, would become like the larger, dragon-like specimen. Once they awaken, they cannot revert back to humanoid form.[15]

When the tissues of both forms are combined, a mobile parasite results. When implanted in humans, the parasite takes over the brain and the hosts develop into Yoma.[16]

Miria admits being inside the chamber nine years ago, then realizing the source of the Yoma. She exposes the myth perpetrated by the Organization—that Yoma eat their victims and absorb their memories, then impersonate the victims. The reality is that the parasite eventually leaves the host, due to the Yoma body breaking down from excessive shapeshifting.[17]

She notes that the Organization violated their own rule about never killing humans, as they turned humans into Yoma, then ordered their warriors to kill these former humans. She beheads Limt, then cuts the life-support tubes of the prisoners.[18]

In an anticlimax, Miria is strangely reticent and reveals little to Deneve and Helen.

Outside, as the Ghosts regenerate the wounded on the battlefield, Miria announces the death of Limt.[20] 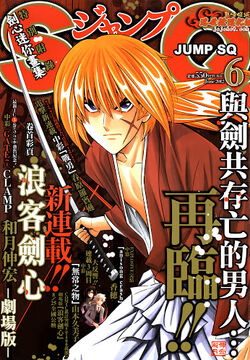 Retrieved from "https://claymorenew.fandom.com/wiki/Scene_126?oldid=60394"
Community content is available under CC-BY-SA unless otherwise noted.