As Hysteria fires her tethered blades, Miria analyzes the situation.

On the ground, Hysteria's sudden turns and stops is due to leg traction, similar to the great claw Clare used to brake her speed in Pieta. When aloft at maximum height, Hysteria's tethered blades, once anchored, allow her to move in any direction, down or sideways.[8]

Deneve is able to regenerate by herself. She tells Tabitha and Yuma to help Dietrich and Nike.[9]

Hysteria takes down and captures Anastasia, then promises to spare whoever pulls out the sword.[10]

Miria realizes everyone is about to be killed. Out of desperation, Miria begins to awaken, gambling that she will actually attack the awakened beings, not her comrades.[11] Deneve guesses Miria's strategy and says no one will blame Miria if any of the warriors are killed, since they realize and have accepted the possibility. Deneve offers her hand as an invitation for Miria to live and die as a human, no matter how dire the circumstances. Miria takes Deneve's hand.[12]

When Deneve climbs Anastasia's hairs, she tells Miria to use her Yoma energy to adjust the hair strength.[13]

As the two climb skyward, Miria asks about Clare. Deneve reassures her that Clare is "resting" in Rabona.[14]

Hysteria is about to lose patience and attack everyone en masse, but Nike volunteers to pull out the sword. But this misdirects Hysteria's attention—Nike cuts free Anastasia, then Deneve and Tabitha grab Anastasia. Nike tries to strike Hysteria, who dodges Nike's sword.[15]

Angered at being tricked, Hysteria pursues Deneve and Tabitha, but Miria lands astride Hysteria and attacks. But Hysteria throws her off. Miria escapes skyward.[16]

Hysteria loses control momentarily, when Helen loosens one of the archored blades.

Deneve implies that Miria intends to draw Hysteria into a 3-way fight with Cassandra and Roxanne.[17] 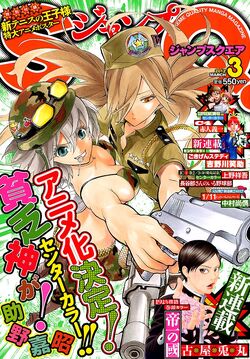