No cold open. Color plate of Miria in the original Jump SQ publication.[6] A black-and-white version appears in the tankōbon.[7]

On the battlefield Miria watches both Hysteria and Roxanne awaken.[8]

Inside Organization Headquarters, Raki and the trainees help the injured Rafutera. The trainees sense the awakenings outside.[9]

In the Executive chamber, the Men in Black are in near panic. Even Limt displays rare exasperation with Dae.[10]

Limbless, Audrey orders the Twin Trainees to flee with the other trainees and try to live a human life. But the Twins disobey and evacuate the wounded Claymore warriors.[11]

Roxanne awakens into an Art Deco, metallic form, with skeletal arms and fern-like wings resembling faulds. She picks up a wounded Claymore warrior to eat. But a Twin cuts free the warrior.[12] 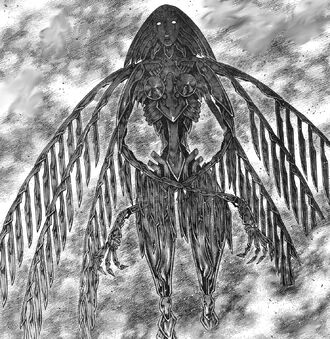 When Roxanne tries to capture the twin, Cassandra interferes, the twin fleeing to safety. Cassandra claims all the "food" on the battlefield for herself and orders Roxanne to eat excrement and turn into excrement. The battle between the two Abyssals begins in earnest.[13]

As Miria evacuates another wounded warrior , she confronts the awakened Hysteria, a Dada juxtaposition of a harpy ship's figurehead, bristling with Cubist sabres and spider legs. Hysteria resembles a molting pupa stuck halfway in its shell. Two Claymore warriors are impaled on Hysteria's legs.[14]

But Hysteria cannot eat them, being unable to swallow due to the sword in her throat.[15]

Miria rejects Hysteria's offer to let Miria go free with one of the warriors if Miria removes the sword. Instead, Miria attacks with her sword, which Hysteria dodges. Mira further awakens, but is pulled down to earth by Anastasia's hair. Miria is told to stop awakening.[16]

The Ghosts, Anastasia's hunt and Dietrich have at last arrived.[17] 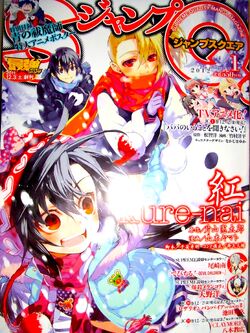