As Cynthia regenerates Phina, the Ghosts destroy the awakened beings.[6] 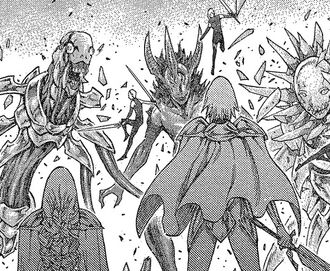 Dietrich admits to her comrades that the Ghosts are deserters from the Organization.[8]

Anastasia and Nike help the Ghosts. But one awakened escapes.[9]

Yuma detects the approach of the runaway awakened. Cynthia, busy with Phina, cannot leave to fight.[10]

Yuma must fight alone. She uses her thrown sword. The swords spins like a helicopter blade and hits the awakened's legs, cutting them in half. Then she decapitates him. But the flying head nearly hits the other warriors.[11]

Anastasia, Nike and the other Ghosts rejoin the others. Deneve orders Tabitha to search for weak Yoma auras.[12]

Tabitha senses what may be a Yoma-making facility.[13]

Anastasia guesses the purpose of the Ghosts—to destroy the Organization. Anastasia offers to join the rebels.[16]

The question arises: does everyone go straight to Organization Headquarters to save Miria, or the Yoma-making facility? But Deneve, honoring Tabitha's commitment to Miria, allows her to decide which path to take.[17] 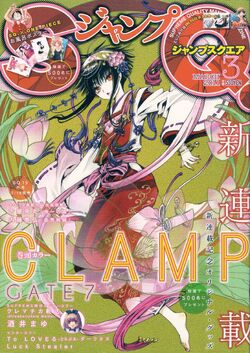