Nighttime. A Yoma, a red humanoid monster, confronts a strange woman. He attacks.

The unnamed woman, with vertical pupils, readies her sword—she beheads the Yoma.[7]

There are two color plates in the cold open—one of Clare killing the Yoma and a second of Clare herself.

Day. In the medieval village of Doga[8] a crowd gathers round a dead man in the street. Someone says a Yoma did it.[9]

At a village hall meeting, the villagers demand action. This was the sixth victim. Someone says Yoma eat the organs of their still living victims.[10] A young man, Zaki, says Yoma are impossible to detect once they take human form.[11]

The chief announces that he hired a Claymore. Only a Claymore can detect the Yoma.[12]

The meeting ends on a fearful note, due to the Claymores' reputation. Outside, Zaki meets his pre-adolescent brother, Raki, who admits eavesdropping. When Raki asks about Claymores, Zaki gives him a mix of fact and rumor. He calls both the Organization and its female warriors Claymores, both named after the Claymore sword. Zaki adds that Claymores are half-human, half-Yoma.[13]

Their talk is interrupted—villagers shout the Claymore is coming. Raki races to the village edge. Before the setting sun, the unnamed woman from the cold open approaches.[14] She wears a Roman Army-like uniform. She carries a huge sword in a carrier on her back. The horns of the carrier holds a cape.[15]

At the village hall, the chief asks a petite female assistant to get the money. The Claymore refuses payment, saying that after the job is done, someone will come collect the money. If she is killed, there would be no reason to pay the fee. But in any case, either her body, or the Yoma's, will eventually turn up. The chief nearly faints.[16] 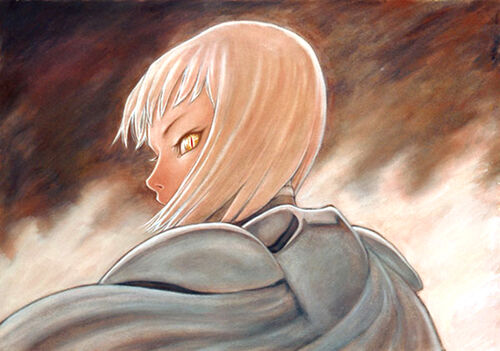 Raki races up behind her. She whirls about and nearly decapitates him with her sword. But she strangely allows him to follow her. When he calls the organization she works for as "Claymore," she says the Organization has no name.[17]

When Raki calls her a "Claymore," she says that name was given to warriors by humans.[18] Under a gateway leading out of the village, Raki says that beyond this point are the mines. The warrior stakes her sword and sits against it. Raki mimics her with a board and sits with her.[19]

Raki tells her that his parents were the first to be killed by the Yoma. He wants revenge. She tells him that she is here due to a request and not for revenge. The village bell tolls. Raki has to return home to cook dinner. He tells her his name and then asks the warrior for her name. But she refuses to give it.[20]

At home, Raki finds his uncle bloodied body. Zaki shows up. But “Zaki” awakens into the Yoma. The Yoma reveals that he killed Raki's parents. The Yoma further claims to have taken over Zaki's mind and body. The Yoma says he must have one last meal before leaving town. He attacks Raki.[21]

The ceiling explodes—the Claymore warrior plunges and lands between the two, her striking blade missing the evading Yoma. The warrior reveals that Raki carries the Yoma's scent, accounting for her earlier attack on Raki. After that, she only had to let Raki lead her to the real Yoma.[22]

With two strokes she cuts off both his arms. And with a last strike to the head, she bisects him in two.[23]

She leaves the kitchen in a wreckage, Raki slumped on the floor in shock.[24]

Later at the village hall, Raki hears that the warrior is leaving. 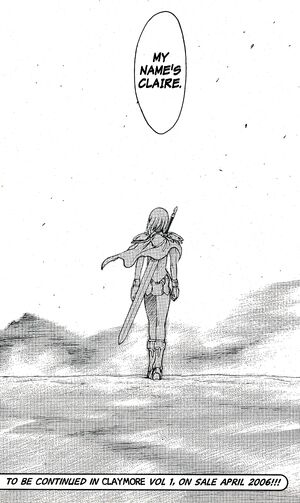 "Claire" in US Shonen Jump

He races out to the village's edge. He again asks for her name. This time she answers—“My name's Clare.”[25] 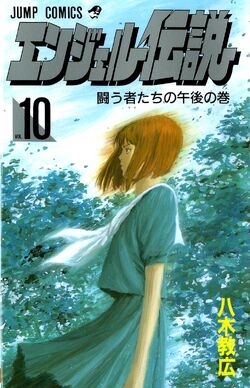 The front panel of the July 2001 Monthly Shōnen Jump depicts Clare. This artwork reappears on the front jacket face or cover panel of volume 1 in all tankōbon language editions.[35] This artwork is reproduced in its original form on p. 032 of Memorabilia. 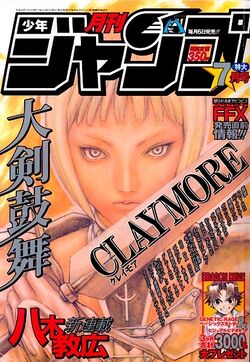 A month before the release of the first VIZ Media tankōbon, Scene 1 appears in the March 2006 Shonen Jump, US edition. In this preview, the "Claire" spelling appears in the last panel.[36]

An excerpt of Scene 1 appears in the 2006 compilation Shonen Jump Manga Plus Advanced free sampler.[37]

Retrieved from "https://claymorenew.fandom.com/wiki/Scene_1?oldid=60466"
Community content is available under CC-BY-SA unless otherwise noted.