Appears to wear eye-makeup and has a mole under the right eye.

Old Generation uniform. A butterfly-shaped buckle holds 2-layer spaulders on the shoulders and a lightly built sword carrier between the cervical and thoracic of the spine.[19] The faulds skirt has a protective seat plate.[20]

Sardonic. Serial partnership and mimicry tropes resemble "Olga Semyonovna" of Anton Chekhov’s short story The Darling, where a series of marriages ends in the death of the husband. Black widow "bond and kill" behavior pattern resembles a bipolar disorder.

Has odd sense of fair-play in fighting Twin Trainees.[22] Her moniker derives from her serial "Love and Hate" relationships.

In Chaldean Numerology, the number 1, Roxanne's number, is the number of someone fated to dominate over all others. Or fail catastrophically.

Unknown type. Having no Organization datasheet in the "Yoma War Record," her ability and baselines are unknown. Appears to have a high sensing baseline. Unknown sensing ability similar to Alignment.

Roxanne is powerful enough to cut down the Claymore rebels and defeat the Twin Trainees.[24]

When Roxanne is Claymore warrior No.35, she befriends No.31—Uranus—whose sword gouging technique Roxanne imitates. By the time Roxanne becomes No. 24, her mentor dies mysteriously during a hunt.[26]

Roxanne's next victim, No. 9—Nadine—wears an eye patch. Nadine uses Yoma power sensing to compensate for her lack of depth perception.[27]

During a hunt with No. 9, Roxanne also "loses" eye and wears eye-patch. Again, Roxanne imitates her mentor's technique. The two become "friends," but No. 9 dies mysteriously during hunt.[28]

Roxanne meets No. 1—Cassandra—when Roxanne is No. 5.

Roxanne repeats "Black Widow" routine—idolizing a lonely, friendless mentor, imitating her technique and mannerisms. She even copies Cassandra's left handedness. But Cassandra keeps her technique a secret—even from Roxanne.[31]

Cassandra bobs head like metronome. Her body falls to ground. Then reveals the origin of Roxanne's nickname for her—"Dusteater".[34]

But after defeating Audrey, Rachel and Nina, Cassandra remembers her death, causing her old wounds to reopen.[35]

During a failed awakened hunt, Roxanne allows warrior No. 35 to die. Cassandra returns to Organization Headquarters to confront Roxanne, who baits her to attacks all the warriors en masse.[36]

During the battle, Roxanne delivers the coup de grace to Cassandra.[37]

As Cassandra remembers her past, she awakens into a huge prone, humanoid form, with tentacles supporting the body.[38]

Cassandra sends out hydra-like tentacles, ending with human heads that strike the ground. Roxanne is ecstatic. She attacks Cassandra.[39] 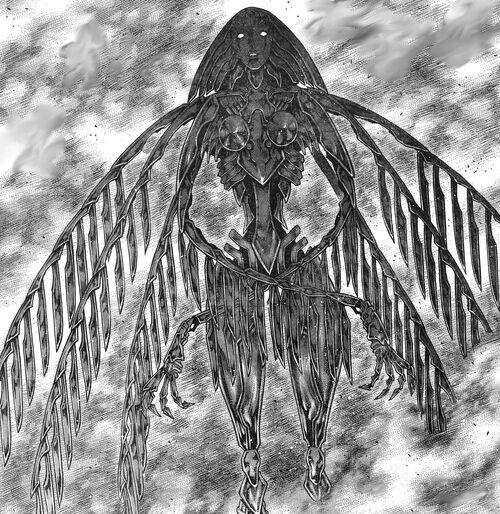 Roxanne has awakened into an industrial sculpture form, with Sphinx-like head.[43]

Roxanne picks up a wounded Claymore warrior to eat. But a Twin cuts free the warrior.[44]

When Roxanne tries to capture the Twin, Cassandra interferes. The battle between the two awakeneds begins.[45]

Cassandra continues eating as she battles Roxanne.[46] Despite the proximity of the Hysteria-Miria dual, Cassandra and Roxanne fight on, oblivious to the other battle. Roxanne launches her blades at Cassandra.[47]

Wounding Cassandra, there is a lull in the fighting as Roxanne steps on Cassandra's face.[48]

Miria is losing the fight, but doggedly lures Hysteria into position. Cassandra dares Roxanne to use up her blades. Just before Roxanne launches her final volley to finish off Cassandra, Miria touches on Anastasia's cord of hair,[49] then launches herself at hyper-speed past Hysteria, leaving Hysteria at ground zero.[50]

Roxanne's volley sends blades in all directions. On the ground, Miria's comrades flee the area.[51]

Though Roxanne discharged two armloads of blades, they prove too little too late. Having spent her blades, Roxanne is now helpless. The hydra-tentacles of Cassandra now completely consume Roxanne.[52]