. Ultimately from "Raginald," derived from the Germanic elements ragi (advice) and wald (rule).

"Reynaldo" (es) or "Rinaldo" (it) are other translation possibilities for リガルド, as well as "Ligardes" (fr).

VIZ Media and FUNimation both use "Rigaldo."[18]

), the Japanese transliteration for "Riccardo" (Richard).

The Italian edition uses "Riccardo"[19], a possible allusion to Richard I of England, also known as Richard the Lionheart.

It may derive from the French Baroque painter Hyacinthe Rigaud

, painter of kings, such as the "Sun King," Louis XIV of France.

, which can be loosely translated in as "Silver Lion Cub King," an unsubtle parody of Isley's own nickname (Silver King).

Rigaldo dislikes it for obvious reasons. 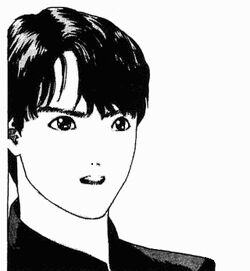 Blonde mop-top hair and silver eyes. Appears to be in late teens–early-20s.

Early basic Organization uniform. A plate buckle hold 3-layer spaulders on the shoulders. Instead of the later carrier, a simple hook attached to a back buckle holds the sword.[23] 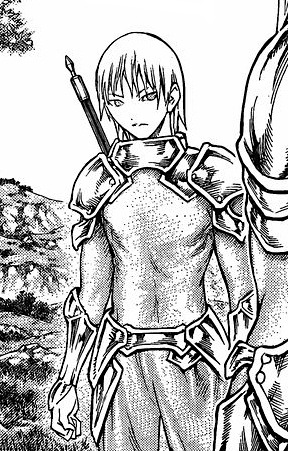 Warriors of the Initial Male Era wear neither a dicky with a symbol, nor a cape.

Biped lion of varying unknown heights, though taller than Claymore warriors. Anthropomorphic lions trace back to the Paleolithic age more than 30,000 years ago and are the oldest known chimea.[24] Rigaldo leonine form is similar to the earlier Zodd of the Berserk series.

Rigaldo appears calm and composed, allowing him to be Isley's most cooly, efficient warrior. However, Isley alludes to a hidden, volatile side to Rigaldo's personality, which Isley witnessed in the past.[25]

Rigaldo is an offensive type.[26] Having no Organization datasheet in the "Yoma War Record," his ability and baselines are unknown. Appears to have a high agility baseline.

Early life unknown. Claymore warrior No. 2 of the male era.[27]

During the male era of Claymore warriors, Isley (No. 1), Rigaldo (No. 2) and Dauf (No. 3) meet on Vinci Hill.[28] Isley announces that No. 4, Chronos, is the fourth single-digit to awaken. Rigaldo realizes that all the warriors will awaken and any action is futile.[29] But before he awakens himself, he challenges Isley to a sword-fight, as he never accepted the No. 2 rank given by the Organization.[30]

But before Isley and Rigaldo can fight, a young female warrior appears.[31] She introduces herself as Riful. Caught unaware, Rigaldo puts away his sword and leaves, as does Isley.[32]

Priscilla, now in the guise of a young girl, wanders through a snowy village. When a stranger offers to help, Priscilla says "I want to eat guts."[33]

Later, Isley and Rigaldo survey the wreckage of the village.[34]

Priscilla shows up naked in a new village. Again, a stranger offers to help. Priscilla responses by killing and feeding on the villagers. But Rigaldo shows up and awakens into his lion form.[35]

Isley awakens into his centaur form. But when he fights Priscilla, she destroys the upper half of his torso.[37]

Isley reverts to his human form and submits to Priscilla. He swears allegiance and asks for her greatest wish. She replies that she wants to find her parents in the south. He promises to help.[38]

Assigned by Isley to lead the Northern Army invasion of Pieta during the Battle of the North.

During the first engagement, all three scouts are killed by the Battle Group.[39]

At Isley's house, Isley meets Rigaldo in the drawing-room. Rigaldo reports the loss of the three scouts. He argues with Isley over the conduct of the battle. Isley orders Rigaldo to lead the Northern Army and destroy Pieta in a second engagement.[40]

He wounds Deneve. Clare further awakens and attacks, but Rigaldo dodges her. He finally captures Miria. But Clare cuts off his arm.[42] As Clare and Rigaldo fight, Helen rescues Miria and destroys Rigaldo's arm. Clare gains control of her speed by awakening her left arm into a giant claw, which she uses as a brake. She eventually kills Rigaldo.[43]

Isley meets Rigaldo in a snowy forest. Rigaldo reports the loss of the three scouts. He argues with Isley over the conduct of the campaign. Isley orders Pieta destroyed.[44]

After the 7-year timeskip, Clare fights Priscilla in Lautrec. Clare remembers using her size and speed against Rigaldo. [46]

Retrieved from "https://claymorenew.fandom.com/wiki/Rigaldo?oldid=60694"
Community content is available under CC-BY-SA unless otherwise noted.