Described but unnamed by the characters in the manga. "Riful 'reawakened" appears along with other variants in Claymore forums and blogs.

In the third-person narration of the Jump SQ original, this being is referred to as Riful's 残滓 zanshi (remnants), meaning she is a reawakened being of Riful's flesh rather than being Riful herself[6] Combine with what is evidently Dauf's flesh (as his powers are also demonstrated by this being), a "reawakened" version appears.

She appears as a humanoid "tween," 8–12 years old. She has pupil-less eyes and ribbon-shaped locks of hair.

Similar to Riful of the West, but instead of a woman's torso, the reawakened being has a child's torso with leg stumps that splits out into ribbon tentacles. Like the mother, the torso itself is composed of sandwiched ribbons. "Hair locks" are also ribbon-like. As with the original Riful of the West, Riful reawakened's split apart under attack also suggests the shuffling of playing cards.

Angry being seeking revenge for death of Dauf, something gotten from Riful of the West in her dying moments. She makes a child's game of fighting to the death with Priscilla.

Unknown type.[7] Her original, Riful, is an offensive type. Having no Organization datasheet in the "Yoma War Record," the reawakened's baselines are unknown. According to the Organization, this was a new "being", something they had no record of as it had only recently awakened.

As with Riful, she appears to have a high strength baseline, given her riffling ability. Her entire "body" constructed like a deck of cards. Strips of Yoma tissue are laminated into either a facsimile of a human body or awakened. These strips can "riffle" at will in either avoidance or attack. Similar to the double-helical ability of Octavia.

Unknown. Owing to youth, she may use ability alone.

In Rabona, the Ghosts prepare to engage Cassandra. Elsewhere in the Toulouse forest, the bottom half of a female torso wanders through the forest (hence the Jump SQ title "The Wanderer"). When the torso stumbles and falls, bodily fluids and tentacles flow from the open cross-section. The fleshy strips form the head of a young girl.[8] 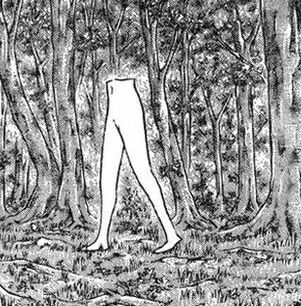 Chronos and Lars remotely sense the entity's aura. Chronos judges that the aura is similar, but unlike that of Riful's.[9]

As the Ghosts rush through a valley forest to intercept Cassandra, Helen senses a Riful-like aura nearby, but Miria orders everyone to concentrate on Cassandra.[10]

The Ghosts' assault fails. Elsewhere in the hills, Cynthia, Tabitha and Yuma realize their failure to synchronize with Cassandra. But despite this crisis, they become even more concerned about the mysterious, yet familiar aura that Helen noticed earlier.[11] 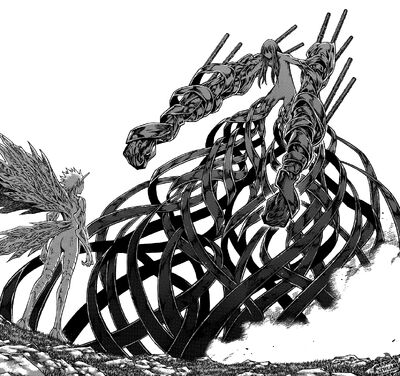 Destroyer–Priscilla counterattacks with its own rods, but the girl smashes the rods with her hair tentacles, then launches more rods.[13]

Revenge from the grave[edit | edit source]

Both Chronos and Lars are terrified that the being is defeating Destroyer–Priscilla.[15]

Priscilla is temporarily defeated, but escapes the grip of Riful "reawakened". Priscilla rejoins her near-severed head and vomits out the remains of the Destroyer.[17]

Priscilla thanks Riful "reawakened" for helping to expel the Destroyer.[18]

Dae says that with the young Abyssal's endless supply of energy, the two combatants are now evenly matched. He invites Rubel to stay and watch to see the ultimate outcome.[20]

But Priscilla regenerates her arm which she uses to break free of the ribbons. This surprises everyone.[22]

Priscilla continues to destroy the ribbons till she is able to break off one of the rod launchers. Riful "reawakened" notices that the new arm is different than before.[23]

Priscilla says that her old Claymore sword became a part of her flesh and blood. She then reverts to her original human form and from the right arm a living sword develops. The sword has throbbing veins as do all Yoma-entities and is apparently alive. But Priscilla uses it like a real sword and eventually cuts the upper torso of the awakened down to the original lower half.[24]

Retrieved from "https://claymorenew.fandom.com/wiki/Riful%27s_daughter?oldid=60702"
Community content is available under CC-BY-SA unless otherwise noted.