In US public records during the early to mid-20th century, "Raftela" appears as a mispelling of "Raffela," a variant of the Italian feminine Raffaella.

Currently used in fan-fiction as the name of female characters. In Claymore, "Raftela" is only used in scanlations and the Tokyopop (de) and Star Comics (it) editions.

Rubel describes Rafutera as Organization's 切り札 kirifuda (trump card). 切り札 is also used to describe the three resurrected warriors.[12] Rather than a monicker, "Trump Card" appears to be a set phrase used by Organization personnel for any last resort.

A shark-tooth-shaped buckle hold 2-layer spaulders on the shoulders, the second layer being slotted, possibly to allow arm raising without raising the spaulders. The faulds have no seat plate.[13] 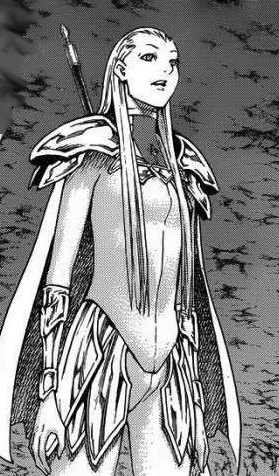 Reticent persona. Possibly due to being reared and trained in isolation from other Claymore trainees.[14]

Having no Organization datasheet in the "Yoma War Record," her ability and baselines are unknown. Appears to have a high sensing baseline. Unknown sensing ability resembles Alignment.

After her assault on Organization Headquarters, Miria look upon the unconscious warriors she wounded. Audrey and Rachel appear, ready to attack. But Miria cuts them down.[16]

Rubel watches, suspecting Miria is about to kill the Men in Black.[17]

Identical Twin Trainees (tweens) challenge Miria. Like Alicia and Beth, they use a form of Controlled Awakening. But the Twins can switch roles back and forth. Miria holds her own in combat, trying not to harm Twins.[18]

Miria wonders if she should kill Twins. Accidentally, she cuts off one of their arms.[19]

The other warriors revive and surround Miria, now on her knees. They cut her down.[23]

In the Executive chamber, Men in Black assess the situation—trainees deserting and the rebels' impeding attack.[24]

Rafutera reports to Chief Limt. He asks why she did not sense Miria's presence. She says since she was not asked about Miria's Yoma power, she did think it necessary to answer. Limt now realizes that Rafutera has betrayed the Organization. He asks her why.[25]

Rafutera say during the final attack on Miria, the warriors felt confusion, fear, anger and sorrow as well as love and respect. Still half-human, the warriors hesitated at killing a fellow warrior.[26]

When Miria arrived, the warriors felt both despair and salvation from her and developed a strong instinct not to kill her. The current situation is due to misunderstanding the human feelings of the warriors.[27]

Limt's inquiry is actually Rafutera's treason trial. Rafutera is punished on the spot as spears penetrate her body.[28]

On headquarter grounds, the Twin Trainees have reattached their limbs. But Roxanne pierces their heads with her sword. Despite their head wounds, the Twins still fight on.[29]

Rafutera tries to apologize for using Yoma power harmonization on Miria, who understands that Rafutera was only acting under orders. Miria says that the Twin Trainees will want to thank Rafutera for saving their lives.[31]

But Rafutera survives her wounds. Inside Organization Headquarters, Raki and the trainees free her from the guards.[32] Meanwhile, Rafutera watches Cassandra hacking off the limbs of Audrey, Rachel and Nina.[33]

As Cassandra is about to deliver coup de grace to Audrey, Raftela uses her Yoma power harmonization to alter Cassandra's sword blow, delivering a non-fatal wound.[34]

Rafutera tries to apologize for using Yoma power harmonization on Miria, who understands that Rafutera was only acting under orders. Miria says that the Twin Trainees will want to thank Rafutera for saving their lives.[35]

Retrieved from "https://claymorenew.fandom.com/wiki/Rafutera?oldid=59858"
Community content is available under CC-BY-SA unless otherwise noted.