Possibly ironic allusion to character not healing her eye as penance for losing Luciela in the "Controlled Awakening" experiment.

"Raphael" is either an archangel, or demon, depending on tradition. Possible allusion to Renaissance artist Raphael, originally spelled "Raffaello."

Name of a city in Argentina.

The left eye is an expressionistic image of blindness and is not necessarily a scar. The jagged star pattern changes shape from panel to panel and sometime does not appear at all. This blindness motif is repeated with Galatea. 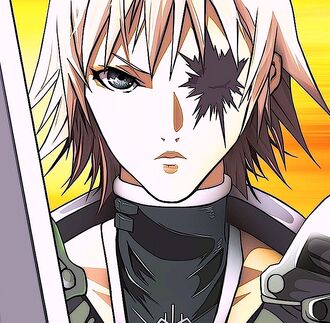 During the Luciela Era of the Old Generation, the current design appears—the dicky embossed with the warrior's symbol, the sword carrier with horns that hold the cape. And the faulds skirt.

The sowbug-like buckle holds 3-layer spaulders—unique in that the plates are stacked on the shoulder in reverse order to the norm.

The faulds skirt design is also unique—bands are layered on the hip in the sowbug manner. The skirt also has a protective plate on the seat. See illustration below.

Typical stoic warrior persona, due to tragic past. Lives only to kill her awakened sister.[21]

In Chaldean Numerology, the number 5—Rafaela's number during the Current Generation—is the number of androgyny. A 5 tends ot place the welfare of others before oneself.

Rafaela is an offensive type[24] warrior, her mental ability being Yoma Energy Suppression.[25]

Rafaela uses her high Agility baseline (A) and Yoma energy membrane to perform kicks that can hit opponents unprepared.

High talented test subject that served as No. 2. Her potential is equal to that of her older sister Luciela (No. 1 at that time).

Note: Irene noticed Rafaela's high ability, so she mentioned even with both hands she can not defeat her. But, later Clare defeats Rafaela with a reduced Version of the Quicksword-technique. Unclear, whether Rafaela fights with her high ability and technique at full power against Clare.

In flashback, warrior No. 1, Luciela, fully awakens during first Controlled Awakening experiment. Her younger sister, warrior No. 2, Rafaela, is unable to change back Luciela. Luciela wreaks havoc on Organization Headquarters and escapes.[27]

Rubel meets Rafaela in her apartment. He tells her that she has been decommissioned by the Organization. He further suggests she leave.[28]

Rafaela passes through a town near headquarters. She overhears that a pair of identical twin babies may have been handed over to Organization.[29]

After an indeterminate number of years, Rubel finds Rafaela living in a cave. He tells her that the now adult Teresa was lost, along with warriors No. 2 through 5. He offers the position of No. 5 to Rafaela, who accepts in exchange for Luciela's whereabouts.[31]

Several years later, Clare leaves Ilena's hidden valley. Ilena stands outside, gazing into mountains. Rafaela approaches from behind. Rafaela tells Ilena that the Organization has ordered her purged for desertion.[32] 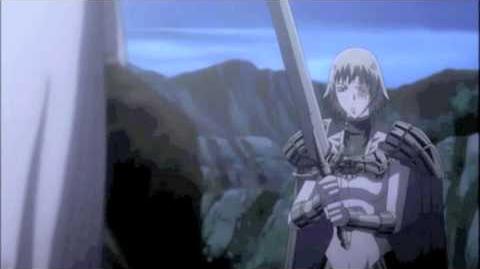 Meanwhile, Clare travels through forest. Suddenly, she senses something amiss in Ilena's arm. But a loud noise interrupts her thoughts.[33]

3-month timeskip. Despite Clare's rebuffs, Jean insists on following her through the forest. Jean wants to repay Clare for saving her life. Suddenly, Rafaela confronts them. She asks which is Clare.[34]

Clare is confused as she failed to sense the warrior's Yoma aura. Rubel appears behind the warrior.[35]

Rubel reveals that Rafaela excels in aura concealment. Also, that she can defeat both Clare and Jean. But because Clare aided the warriors at the Witch's Maw, the Organization will pardon her for desertion, provided she join the Organization's battle group assembling up north.[36]

After the Organazation's defeat in Pieta, Isley invades Mucha. Rafaela watches him defeat Luciela.[37] Later, Rafaela finds Luciela kneeling in a stream. They embrace, but Rafaela breaks Luciela's back. Rafaela injects Yoma power into Luciela and they merge.[38]

Later Riful, arriving too late to help Luciela, meets Isley and Priscilla. Riful retreats.[39] But Riful finds the merged sisters and brings them back to Lautrec.[40]

When Clare reaches out to touch Jean, no one is there. Rafaela attacks. Clare uses Windcutter, but is beheaded.[43]

Clare awakes in darkness. Fight was only a dream within a dream. Rafaela says Clare entered Rafaela's mind. And everything and one are regenerated from Clare's memories.[44]

Rafaela says there is "something" that Clare must know. And adds that Clare is making "a big mistake."[45]

But Clare has little time left before Rafaela awakens. Clare must defeat Rafaela—Clare's death here would result in her physical death.[46]

Clare resorts to Quicksword and kills Rafaela with the right arm of Ilena, who Rafaela executed seven years ago.[47]

In a Yoma power explosion, Rafaela awakens. As Clare is hurled back, all Rafaela's memories and emotions are inscribed into Clare. Among which is "the thing you must know."[48]

Clare's naked body emerges from the mass of Yoma tissue. She gazes on sky-high entity—the Destroyer—a demonic parody of twin goddesses of love, Teresa and Clare.[50]

Last act of Rafaela as a human is returning Clare's sword and clothes.[51]

In Rabona, Miria and Clare dodge the Tapeworm awakened's attack. Tapeworm bristles with dozens of armless torsos, each identical—only one contains the vital organs, according to Tabitha. But the situation is complicated by the awakened's aura spread evenly among the torsos.[52]

Miria and Clare race to find the vital core. Clare realizes her movements are those of Rafaela, who used a Yoma Energy Membrane technique, allowing Clare to sense movement beyond her peripheral vision. Miria and Clare reach the last torso and together they make the final strike.[53]

Retrieved from "https://claymorenew.fandom.com/wiki/Rafaela?oldid=60803"
Community content is available under CC-BY-SA unless otherwise noted.