On page 139 of Claymore 7, Scene 38, the VIZ Media translation, the technique is actually spelled as one word, "Quicksword." But the term is usually divided with a hyphen to fit speech bubbles.

In real life physics, quickness is the rate of acceleration between two points in space, speed is the magnitude of velocity at one point in time.

Ilena's datasheet names and describes the technique.[11] In the VIZ Media translation, Noel mentions Ilena's nickname, "Quicksword," in Scene 18.[12] But only in Scene 37 does Ilena actually name the technique,[13] as she does in other translations.

In some translations, Ilena's nickname and the technique name differ. In the Tokyopop edition (de), Ilena is named "Irene die Wirbelklinge"[14]

High-speed Continuous Attack[16] enables this technique: attack target by releasing all Yoma power into the sword arm, while paradoxically controlling the berserking arm through sheer will.[17] This ability resembles the Mind Share/Full Control–Mind Share/Full Release abilities of Beth and Alicia, in which another warrior fully awakens, instead of a body part of the controlling warrior.

Less precise than other techniques, unpredictability of strikes makes Quicksword harder to counter.

Mental baseline is D.[22] But with Ilena's arm, Clare can still attack at superhuman speed.

At another village, the purge team locates Teresa at a local inn.[31]

Ilena burst into Teresa's room. But Teresa immobilizes Ilena's Quicksword. The Organization evaluation to the contrary,[32] Ilena states that Teresa never uses Detailed Yoma Energy Sensing or any other specialized technique against the purge team.

Priscilla becomes into one-horned, winged awakened. The purge team attacks. But Ilena loses left arm, despite her Quicksword. Priscilla then kill both Sophia and Noel.[35]

After escaping Ophelia in Gonahl, Clare and Raki are forced to separate.[36]

Clare lures Ophelia in opposite direction of Raki's path. Clare loses her right arm to Ophelia's Rippling Sword. But Ophelia is defeated by Quicksword of Ilena, disguised in witch-cape.[37]

Ilena guesses Clare's intent to kill Priscilla. She tries teaching Clare the Quicksword. When Ilena realizes Clare can never master Quicksword in her condition, Ilena cuts off her arm and gives it to Clare as a "parting gift."[39]

Outside abandoned castle, Clare uses Quicksword on both ordinary and Winged Yoma.[41]

In entrance hall, Clare destroys Yoma pack, then attacks Dauf, but gets captured. Dauf's armor is too thick for Quicksword. But Galatea arrives.[42]

Riful couches Dauf, who then defeats Galatea.[44] Galatea orders Clare to retrieve Jean, while she holds off Dauf.[45]

In dungeon, Clare uses Galatea's technique to revert an awakened Jean to normal.[46]

Clare asks Ilena's arm for help. The arm on its own volition destroys the roof, toppling everyone to the floor below.[51] Team Undine reinforces Team Flora. Deneve and Undine sever Armadillo's head. When head tries to escape, Flora and Clare cut it to pieces.[52]

Raki races to town, followed by Priscilla. She awakens and Clare gives chase. Miria leads Deneve and Helen to volcano, where Clare and Priscilla fight.[60]

Clare is one of seven Ghosts who desert Organization. Hiding in mountains, they train with Yoma power-less techniques. Clare seals away Quicksword during those years. Clare uses a Yoma power-less version of Windcutter.[63]

Clare confronts Priscilla for first time since childhood. Clare is ready to abandon friends and her humanity to avenge Teresa's death.[69]

But mental "block" prevents Clare from awakening, causing her Quicksword attacks to fail.[70]

Clare fully awakens Ilena's arm and counterattacks with Quicksword. Clare first minces one head, then two, then the fourth. Cassandra attacks with her locomotive tentacles, but Clare minces these too.[72]

Clare lands nearby as Cassandra regenerates. Clare estimates that after the 7-year timeskip, her Quicksword technique is the equal of Ilena's.[74]

Priscilla–Cassandra defeats Octavia's party in the second round.

The three female and two male awakeneds weaken Priscilla–Cassandra enough for Clare to attack. She eviscerates the thorax of Cassandra's body, destroying the pilot torso of Priscilla.[75] 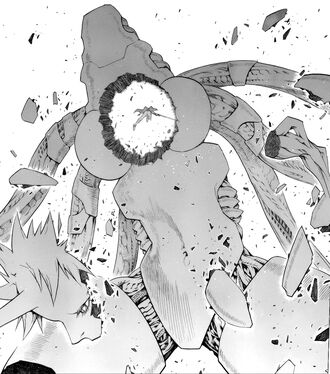 The old Cassandra pilot torso returns, as does Cassandra's sense of self. Helen notices that Cassandra is not moving as slowly as before. Miria suspects that under Priscilla's spell, Cassandra's movements were restrained—Cassandra took far more injuries here than when fighting Roxanne in Sutfafu. But by destroying the Priscilla pilot torso, Clare inadvertently unleashed Cassandra's true power.[76]

Retrieved from "https://claymorenew.fandom.com/wiki/Quicksword?oldid=60676"
Community content is available under CC-BY-SA unless otherwise noted.